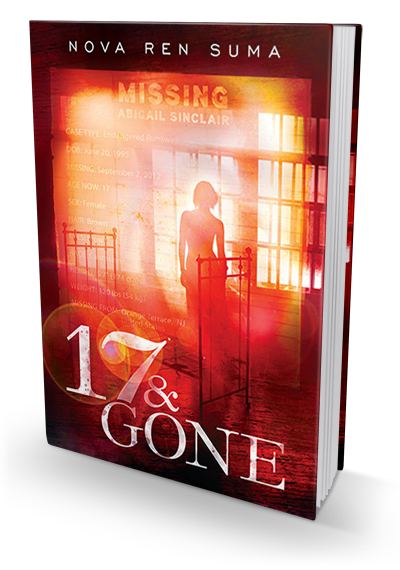 Seventeen-year-old Lauren is having visions of girls who have gone missing. And all these girls have just one thing in common—they are 17 and gone without a trace. As Lauren struggles to shake these waking nightmares, impossible questions demand urgent answers: Why are the girls speaking to Lauren? How can she help them? And… is she next? As Lauren searches for clues, everything begins to unravel, and when a brush with death lands her in the hospital, a shocking truth emerges, changing everything.

With complexity and richness, Nova Ren Suma serves up a beautiful, visual, fresh interpretation of what it means to be lost.


Girls go missing every day. Teenage girls run away, some get kidnapped, or worse. Lauren is acknowledging this first hand when she starts seeing ghosts, or visions, of missing 17 year old girls. A psychological thriller, or is it a paranormal? You’ll have to read and see! 😉

Lauren, being taken over by these visions, is unable to think of anything else but these victims, because as much as the law, and even sometimes the parents, insist they were runaways, she knows they aren’t. Wanting to help these girls becomes priority, pushing her boyfriend away in the process. Lauren is an intriguing protagonist. She’s very smart, analytical, but seeing these girls is becoming an obsession, with finding out the truth. I liked the psychological side of her character, it’s well developed and knows how to immerse its readers, I did wish a bit more of her personality was made clear. I still don’t really know who Lauren is, as a person, as a friend, a girlfriend; what kind of person was she before all of this? How much has this affected her life? As a character study, however, this really works well for the type of story this novel becomes at the end. I can’t go more in depth without any spoilers unfortunately, but while on one hand its hard to emotionally connect with Lauren, this story works perfectly with the out-of-reach character that we get in her. Through Lauren, we also get the missing girls’ stories where we see the circumstances behind their disappearances, showing us exactly how easily this happens, and how often. Some of these stories are mere paragraphs, others pages, and a couple span the whole novel, leaving us with a deep sense of mourning. It shines a new light on what is often mislabeled as a runaway, but is really a tragedy.

What started with one girl turns into a half dozen of them that appear to Lauren, some talk to her, some give her signs to help her along in the process, some are more persistent, almost menacing. I loved the way this story is told, particularly how it unfolds; we get dissociated from the real world and dropped into this girl’s life where nothing appears definite, nothing even truly makes any sort of sense for a while. You have to simply go through the motions and juggle with what you’re given to try to figure out what is happening to Lauren. All the while you’re immersed into a mystery that convinces you, even makes you hope, that it’s all real, that she just might be able to do something about these missing girls. It likes to play with your mind. It’s compelling because it’s vague, if that makes any sense. It also encloses a great range of emotion, especially loss to desolation. No matter if you are hoping for a psychological thriller or a ghost story, I’m convinced you’ll enjoy it!

17 & Gone is an artistically crafted novel; powerful, intensely atmospheric, and will leave you thinking about it for days. I want to say more but, alas, I cannot without spoilers, thus I shall leave it at that!