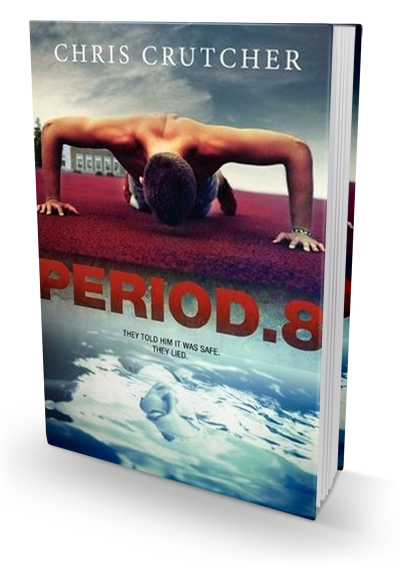 In this full-length novel from Chris Crutcher, his first since the best-selling Deadline, the ultimate bully and the ultimate good guy tangle during Period 8.

Paul “the Bomb” Baum tells the truth. No matter what. It was something he learned at Sunday School. But telling the truth can cause problems, and not minor ones. And as Paulie discovers, finding the truth can be even more problematic. Period 8 is supposed to be that one period in high school where the truth can shine, a safe haven. Only what Paulie and Hannah (his ex-girlfriend, unfortunately) and his other classmates don’t know is that the ultimate bully, the ultimate liar, is in their midst.

Terrifying, thought-provoking, and original, this novel combines all the qualities of a great thriller with the controversy, ethics, and raw emotion of a classic Crutcher story.

–A copy was provided by HarperCollins Canada for review–

What attracted me to this book initially was the mention of a bully. The blurb on the back of the book even says “A new novel about an ultimate bully and the ethics of love”. Sounds pretty good for any gritty contemporary fan, no? Except this “bully” is just a very weird guy with an obvious hidden agenda. The “ethics of love” part is correct, though. The whole book felt like an after-school-special-slash-Sunday-school-summon about love, telling the truth, and teenage hormones.

What is Period 8? An almost retired teacher opens his classroom to anyone who wants to come for a student discussion meeting-like lunch hour. During these meetings they talk about their problems and get advice about relationships. It is as unexciting as it sounds, to be honest. As a strong character oriented novel, it’s a big disappointment when all the character voices sound forced as well. For instance, the dialogue is full of teenage slang and swear words to make them sound genuine but instead it comes off as stereotypical and fake. Take this line for example:

“What’s going on, baby? You look shot at and missed, and shit at and hit.”

Similarly, all the boys call their girlfriend “honey” (or “your honey” when talking to others). Then add in a lot of Fuck, whassup, ain’t, y’all, and I remember even a couple instances of “momma”.

I personally don’t know of anyone who would talk like this. And if some do, I don’t want them in my books!

In addition to these characters we’ve got a teacher who’s way too buddy buddy with the teenagers to the point that felt odd to me. Then we have a girl who disappears–which at first I thought would be an exciting part of the plot, but instead she comes back, then disappears again, sends sinister texts, and then her part of the story gets brushed off as if no effort wanted to be spent on her anymore.

Bland characters: meet an even blander plot. Actually, it’s not even bland, it’s more like gibberish. This is definitely not helped when we have spastic POV changes that make you feel discombobulated. While it starts with the potential to become an engaging mystery, this tapers off into an all over the place plot that doesn’t appear to have any sort of logical flow at all. We have talk of cheating and relationships reminiscent of Dr. Phil, then the messed up disappearance mentioned above which also includes suspicious family behaviour and a crazy father who come up time and time again but are never explored. Furthermore, there’s this totally bizarre conspiracy happening that makes absolutely no sense, with a motive which is, to my knowledge, non existent. Suddenly there were hit men or the mafia or some angry politicians or something swarming the town trying to kill these kids. Yeah, I’ve no idea either…

Now for my favourite part, the MC calls 911 because his teacher is dying in a lake:

911 operator: “Is this a joke?”
“Ma’am, believe me, it’s no joke.”
“It’s nearly eleven, young man. You’re asking me to believe your teacher went swimming with you in the pitch dark and he’s still out there?”
“Some people were chasing us”
“What people?”
“Bad guys”
“I can trace this number, you know. It’s not funny to tie up this line. Hang up and I’ll forget this little prank.”
Paulie hears a click.

Yes, she hung up! 911 hung up on him! I don’t know about anywhere else, but around here, no matter what, even if you say it’s a prank, they have to send someone (yep–personal childhood experience >.<)! They even send someone for pocket dialing now!

I don’t know what else to tell you. This book is a mixed bag of some very strange substances that I wish to never come across again.

*Note that all the quotes in this review are from the uncorrected proof.*
The following two tabs change content below.