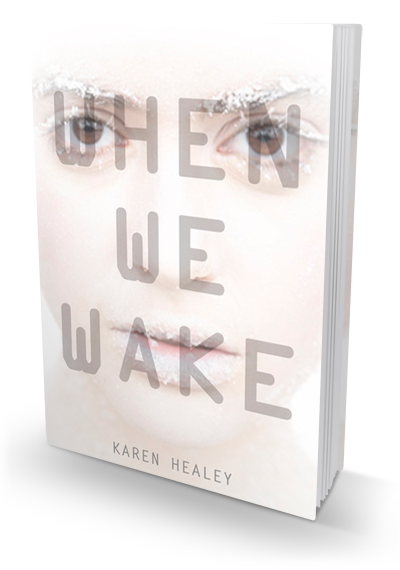 My name is Tegan Oglietti, and on the last day of my first lifetime, I was so, so happy.

Sixteen-year-old Tegan is just like every other girl living in 2027—she’s happiest when playing the guitar, she’s falling in love for the first time, and she’s joining her friends to protest the wrongs of the world: environmental collapse, social discrimination, and political injustice.

But on what should have been the best day of Tegan’s life, she dies—and wakes up a hundred years in the future, locked in a government facility with no idea what happened.

Tegan is the first government guinea pig to be cryonically frozen and successfully revived, which makes her an instant celebrity—even though all she wants to do is try to rebuild some semblance of a normal life. But the future isn’t all she hoped it would be, and when appalling secrets come to light, Tegan must make a choice: Does she keep her head down and survive, or fight for a better future?

Award-winning author Karen Healey has created a haunting, cautionary tale of an inspiring protagonist living in a not-so-distant future that could easily be our own.

What happens after death? Well for Tegan, it’s another life. 100 years from now. A fascinating premise indeed! Who’s not intrigued by the future? Curious about the state of our planet, the technology, even the fashion? I was really excited to get into this book and for the most part it I really enjoyed it. My problems mostly lay with the way the book came off as a big environmental/social speech.

Tegan is in love and it’s all pretty and roses, then she abruptly wakes up… 100 years from now. That would be a shocker on pretty much anybody. I liked how this was done, she was on the defensive, not believing anybody and fighting to get her way. She was a great protagonist for this story and I found her very likeable. Same with the secondary characters she comes to meet and call friends. They were all a little quirky with their own traits and personalities. I liked that they weren’t just fluffy plot fillers, they were fun characters and also very loyal to Tegan. Even though she leaves her love behind in the past, she does meet a new guy in the future (of course! 😉 and the romance is, although I wouldn’t call it chemistry filled, very sweet and well paced.

The plot itself is intriguing, too, we have the usual secrets and conspiracies that come about during the story. We know that what we’re told are most likely lies. It’s also told through Tegan’s voice, her telling us a story that’s already happened to her, so she adds short commentaries at spots to make us understand that we should be wary of everything she’s being told at this point. I thought this was very well done, it added a great touch of suspense into the novel. The world building itself, though, I will say I expected more. We’re suddenly 100 years in the future and not a whole lot is said about society itself. Cars, building, every day life, we don’t get any of those details and it came off as very anticlimactic for what you’d expect in a setting such as this. We do get into some details in regards to computers and the environment–the planet as a whole–but it still leaves too many unexplained areas that I’d think anyone talking about the future would immediately want to know.

The environment, however, nope, that one was not forgotten! Our people’s damaging ways and prejudices against several minorities were brought up so much in this book that it felt like a big speech on what our corrupt ways will bring if we don’t change. The planet dying, extremists who are trying to take things into their own hands, gay marriage being universally accepted, topics like this kept being brought up and not in a way to strengthen world building either–though it did work for that in some ways–but forcefully so that it felt like the book was yelling at me. Yelling at our generation for being the eventual end-all of our world. Shame on us! The first thing I did upon finishing this book was ask a friend “Did you feel this book was very preachy? Like a big speech on how our world is corrupt?”

A fantastic concept, compelling writing, and great characters, When We Wake does have a lot to offer. I wouldn’t say it’s an especially memorable read, I can already tell I will forget most of this book in a few months, but even with my issues it’s still fun and suspenseful while it lasts.

22 Responses to “Review: When We Wake by Karen Healey”