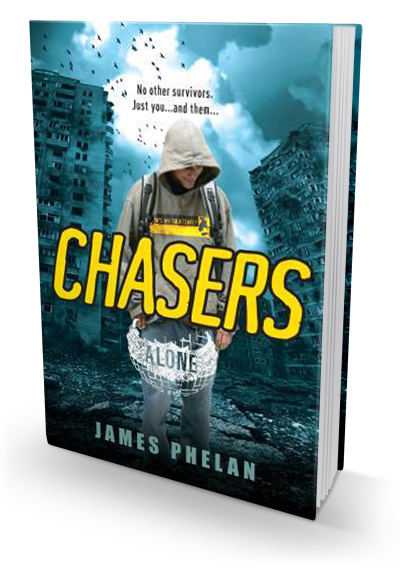 Jesse is on a UN Youth Ambassadors camp in New York when his subway carriage is rocked by an explosion. Jesse and his three friends, Dave, Mini and Anna, crawl out from the wreckage to discover a city in chaos.

Streets are deserted. Buildings are in ruins. Worse, the only other survivors seem to be infected with a virus that turns them into horrifying predators…

Outnumbered. No sign of life. Just them. And you… ALONE.

–A copy was provided by Kensington Teen for review–

Wow I haven’t had an ending catch me this off guard in a long time! Well played, Phelan! Well played! Almost grabbed you a 4 stars, there!

Alas, the book isn’t without its flaws. There could have been more action to stir things up, more Chasers for sure, and a LOT more answers even for a first book in a series–we basically learn nothing of what happened, why, or how far this apocalypse spans. All we know, is that Jesse and his friends got off the subway after an explosion and the whole city is in shambles. The only “survivors” they meet are these infected humans who have a strange unending thirst for anything drinkable, which includes blood. As a post apocalyptic book I can say this is quite different. They’re far from vampires, but also pretty far from being zombies, so what we get is the always scary unknown. We don’t know what caused it or what they really need, exactly, and if they can recover–though we do get intriguing developments on their parts. I thought this was done well and I couldn’t quench my thirst (ha!) for answers fast enough, leaving me to fly through this book in no time. Thus it’s unfortunate that we don’t at least get a hint of what caused this bizarre set of circumstances that add up to what seems to be the apocalypse. At least it’s only book 1!

Since we get no answers you’re probably wondering what the book shells out. Well this book is more about surviving in the early days of a disaster such as described than anything. We don’t get a lot of crazy thrills or heart pounding sieges, we basically hole up in 30 Rock with our characters. I didn’t mind this as much as other reviewers, it seems. It kind of reminded me of This Is Not A Test by Courtney Summers, where the book is very tame in action, but heavy with the fear of the unknown in addition to having a strong psychological base. This one may not be as psychologically messed up, but we do see glimpses of Jesse’s mental instability pop up towards the end especially. As for the fear of the unknown, I think not knowing if and when these strange beings will be hanging out and about gives the book a lot of tension. I personally enjoy these types of survival books more than those that are filled with nothing more than cheap thrills. So yes, the book is slow paced as far as “infected” action goes, but I can’t say I was bored for a minute while reading it. The fascinating nature of the plot kept me captivated. In the end, I’m thankful for the character driven plot that we got in this first novel and I think it will add up to a much stronger sequel as well, knowing what we know now. It makes for a very realistic representation of someone’s psychological profile in such a terrifying situation.

I appreciated the NYC setting a lot too. It’s a setting that’s familiar, maybe a little overused, but what better way to show the monstrosity of an emptiness like Jesse is experiencing? When you’re alone in New York City, you’re truly and undeniably alone. I think the author may have gone a little overboard trying to bring this setting to life, though. With mentions of every street corner, every building, every sight, it becomes a little tiring unless you actually live in the area and are able to follow these details. Otherwise it’s simply blah blah that you come to ignore. It’s not like it makes a difference if I know that our characters are on 7th street, or on 59th, all I need to know is how far they have to run, eh?

I think this is one instance that would work better if it was made into one large stand-alone novel, instead of 3 short (230 pages) books. I guess one argument for it being so short is that the slow pacing never has time to bore, but it did leave time to ponder and get impatient for answers. I will definitely be reading the sequels, I did really enjoy it despite it not being perfect–this is the type of apocalypse that fascinates me for real. You’re suddenly in a world that just went poof! With that said, I’m thinking the series, when finished, will be better rated than its individual installments. Either way, the ending of this one alone is brilliant, thus worth the read! At least I think so!