I received this book for free from Random House UK in exchange for an honest review. This does not affect my opinion of the book or the content of my review. 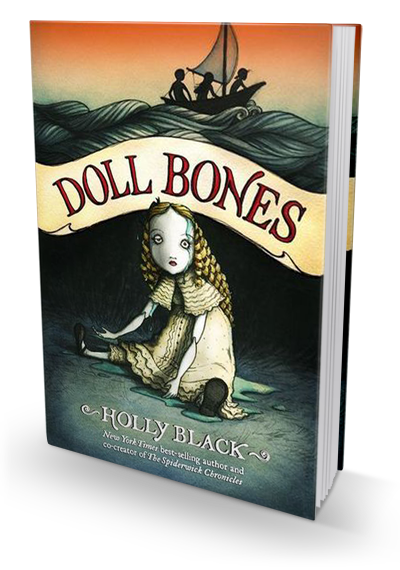 Zach, Poppy and Alice have been friends for ever. They love playing with their action figure toys, imagining a magical world of adventure and heroism. But disaster strikes when, without warning, Zach’s father throws out all his toys, declaring he’s too old for them. Zach is furious, confused and embarrassed, deciding that the only way to cope is to stop playing . . . and stop being friends with Poppy and Alice. But one night the girls pay Zach a visit, and tell him about a series of mysterious occurrences. Poppy swears that she is now being haunted by a china doll – who claims that it is made from the ground-up bones of a murdered girl. They must return the doll to where the girl lived, and bury it. Otherwise the three children will be cursed for eternity . . .

Holly Black is one of few who can write something as cute as it is creepy!

Doll Bones is a Middle Grade novel that is full of adventure and friendship–really the only type of MG books I read and enjoy. It’s the story of Zach, Poppy, and Alice who have been friends for such a long time that their friendship feels familiar even to us. I immediately felt attuned to their mutual trust and support. Not giving in when the other kids laughed at them for playing with action figures. But then one day the game got a little bit more real, and it involves a creepy devil doll who is made of little girl bones!

“Her clay was made from human bones. Little girl bones. That hair threaded through the scalp is the little girl’s hair. And the body of the doll is filled with her leftover ashes.”

*shivers* Obviously, there is a fantastic creepy factor to this book, mostly all due to this hell’s creature doll, but the fact remains that it is an MG novel so it’s the fun kind of creepy– nothing to give you nightmares over, but still enough to appease the creep fanatics such as myself. A lot of it is due to it being open to interpretation: Did the doll really move itself during the night, or was it the animal who trashed their campsite? This is why movies like The Blair Witch Project became so popular, or why most books are better than movies; imagination can be most powerful. Imagination is what’s at the heart of this whole book; it’s what brought the friends together from day 1, and it’s what turned this story into a fantasy adventure.

If imagination is at its heart, it’s the friendship that keeps it beating. These kids, determined and stubborn, go through a fair amount of difficulty to get to where they want to go and, even though there are many arguments and disagreements, they stick up and care for each other until the end. The narrator being Zach, we’re privy to what it’s like to be a young, hurt, pre-teenaged boy who wishes he could stay a kid for just a little while longer. These kids are 12 year olds, thus are still in that imaginative stage without being too childish. So we get a pretty balanced read with some dangerous happenings, a little thievery, risky antics, but it’s all in good fun. To keep things even more interesting, aside from the doll we’re kept from forgetting, we get a mysterious and quite disturbing story that surrounds the death of the girl whom she was created from–or so we’re told 😉

Delightfully sweet with a deliciously eerie vibe, Doll Bones is perfect for the young at hearts who like to plunge into a fun adventure that has all the innocence of a child’s story, but the excellent storytelling any adult can enjoy.