Anna Van Housen is thirteen the first time she breaks her mother out of jail. By sixteen she’s street smart and savvy, assisting her mother, the renowned medium Marguerite Van Housen, in her stage show and séances, and easily navigating the underground world of magicians, mediums and mentalists in 1920’s New York City. Handcuffs and sleight of hand illusions have never been much of a challenge for Anna. The real trick is keeping her true gifts secret from her opportunistic mother, who will stop at nothing to gain her ambition of becoming the most famous medium who ever lived. But when a strange, serious young man moves into the flat downstairs, introducing her to a secret society that studies people with gifts like hers, he threatens to reveal the secrets Anna has fought so hard to keep, forcing her to face the truth about her past. Could the stories her mother has told her really be true? Could she really be the illegitimate daughter of the greatest magician of all?

Magicians, mediums, old school theatre entertainment, and a historical New York setting; I absolutely loved the atmosphere in every aspect of this novel!

Anna Van Housen-the opening act of her mother’s magic show-is the real deal: she’s a medium, she has visions of the future, and she can feel others’ emotions. Plus, she’s rumored to be Houdini’s illegitimate daughter. With a premise like that, how can I not be intrigued? Plus, just look at this amazing cover! I was excited to finally sink my teeth into this one and it was definitely worth it. Not only is our protagonist a wonderfully compelling character with a great personality, the book is set in 1920’s New York City which is utterly fantastic in and of itself. I’ve always loved a New York City setting, but historical NYC is just so chic and luxurious, I felt transported to a time where everything seems exotic. It was perfect for a story like this! 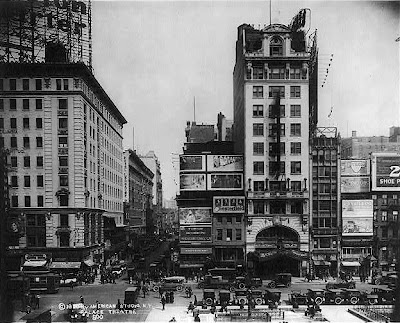 For more on the characters, like I said, Teri created a great character in Anna; one who is ambitious with flaws and weaknesses that make her real and relatable. We see her transform from a girl unsure of her identity, into a confident young woman who believes in her potential. What I loved even more are the relationships she’s fostered with the supporting characters. She and her mom have a peculiar bond that becomes the backbone of the novel. It’s an intricate mother/daughter relationship with hidden meanings and emotions; you think her mother just wants the spotlight all to herself but it’s much more than that. Another relationship to note is between Anna and her cranky neighbor, Mr. Darby. How Anna stubbornly befriends him despite his grumpiness made me like her even more. She’s just the kind of girl who everyone adores. Mr. Darby also surprises by how fun of a character he is.

As for the boys in this book, there are two of them and I enjoyed them both for different reasons. One is sweet and obviously the love interest of choice, the other is mysterious with obvious secrets. I don’t know if it’s the 1920s setting, or the fact that a lot of it is her mother’s doing, but I actually liked the triangle-esque romance. It’s more about Anna deciding who is a better match for her. She doesn’t fall in love with both; it eventually becomes clear which boy she’s meant to be with, and which one will never be more than a friend. While triangles normally irritate me, this one was done with finesse and realism.

What surrounds almost every aspect of this book is mystery. Is Houdini really her father? What is Owen hiding? And there’s the fact of Anna’s terrifying recurring vision. Some of it is pretty predictable, some I didn’t see coming – although I was made to suspect everyone eventually, –  one part even surprised me by having no concrete conclusion but leaving me satisfied nonetheless. It’s safe to say that there is no time to become bored in this novel. From the busy plot to the vibrant atmosphere to the charismatic cast, Born of Illusion is wonderfully and endlessly entertaining!

34 Responses to “Review: Born of Illusion by Teri Brown”