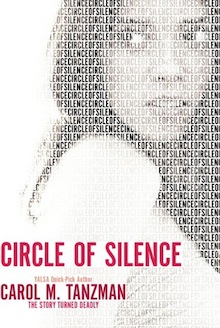 *A copy was provided by Harlequin Teen for review purposes*
As an avid reader of mysteries and thrillers, and after really enjoying Carol’s other novel, Dancergirl —Circle of Silence‘s companion–, this one has been high on my anticipated reads of the year. Regardless of me giving it a 3-star rating, I did truly enjoy it, where it lost its flair on me is on a more individual standpoint which may not be of concern for most readers.

For one, I felt very distant from out protagonist, Valerie. The journalism aspect is interesting, but I felt like some of the decisions she makes are too high stake for a small school news report, as if she thought she was working for CBS and it was expected of her to put her own life on the line. I also found she missed a few clues that, to me at least, were incredibly evident. Consequently, I put this mystery together not far from the half way mark, which inadvertently made the rest of the clues even more obvious. So naturally, I wasn’t kept as captivated by the suspense of the mystery as I was hoping, which, in the end, turned out to be anticlimactic for me. Nonetheless, it didn’t make it uneventful. I was still intrigued by MP — the secret society — and what they were planning next. I was especially delighted to see them share their point-of-view; while keeping their identities hidden, we’re given an inside look at their intentions and schemings inside chapters in their perspective. I also enjoyed the dark, dreary tone throughout that progressively got creepier, not to mention a heck of a lot more serious.

Although never the focal point, there’s a fairly big romantic undertone in the story. We’ve got Valerie’s ex who cheated and now trying to mend his broken relationship, and Valerie’s not sure he can be trusted again. I liked how Jagger was portrayed; even though he’s a cheater and I should hate him for it, he’s not trying to justify his actions, but rather show that he’s remorseful and made a mistake. Plus, it was fun to see Valerie make him work for it. I won’t say that I got any butterflies, but it’s a cute and sweet romance that gives a good distraction from the more sombre notes.

An entertaining mystery with a good amount of thrill and chill, despite my not getting blown-away, I would still definitely recommend it for fans of the genre.

The WiHi series:
Note: these are companion novels and can be read as stand-alones or out of order

Have a look at my review of Dancergirl here!

Today I have the fabulous Carol Tanzman over the blog for Circle of Seilence’s Blog Tour. I previously enjoyed her other novel, dancergirl – find my review here – and stay tuned for my review of Circle of Silence later this week! For today’s post, I have an interview with Carol, along with a pretty awesome giveaway 😉

A secret society has formed in our school….

END_OF_DOCUMENT_TOKEN_TO_BE_REPLACED

I will blow this story…

END_OF_DOCUMENT_TOKEN_TO_BE_REPLACED

Ever feel like someone’s watching you? Me, too. But lately it’s been happening in my room.When I’m alone.

A friend posted a video of me dancing online, and now I’m no longer Alicia Ruffino. I’m dancergirl. And suddenly it’s like me against the world—everyone’s got opinions.My admirers want more, the haters hate, my best friend Jacy—even he’s acting weird. And some stalker isn’t content to just watch anymore.Ali. Dancergirl. Whatever you know me as, however you’ve seen me online, I’ve trained my whole life to be the best dancer I can be. But if someone watching has their way, I could lose way more than just my love of dancing. I could lose my life.