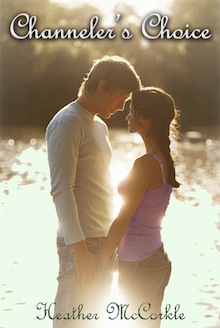 *A copy was provided by Heather McCorkle for review purposes*
The second book in the Channeler series continues to follow Erin and her discovery of her Channeler powers, and now, we’re introduced to the notion of a society – her society. Even though I wasn’t as immersed as in The Secret of Spruce Knoll, I certainly enjoyed finding out more about their powers, in addition to seeing her relationship with Aiden grow.

Passionate and sweet, the romance plays a big part in this sequel. Aiden and Erin are becoming accustomed to their connecting powers and I especially liked how that all works. As in the first book, I found their relationship very mature; it’s not only filled with lust and angst, you can see how they simply click together. I also loved the addition of Caitlin in the story. As Erin’s new best friend, it’s great to finally have someone she can trust and turn to other than her boyfriend. Plus, we’ve got a secondary love story brewing which I found completely endearing. All the characters are truly wonderful; well-rendered and charismatic, they’re easily my favorite part of this series.

We start to delve deeper into the paranormal elements of the story in Channeler’s Choice. We learn a lot about the society that’s quickly becoming a monumental part of the plot; I especially enjoyed the rules at the beginning of each chapter. I do find that Erin and Aidan’s powers are maybe a bit too perfect, but it’s interesting to learn the complexity behind it all. Along with the secluded town and detailed history, it’s an incredibly imaginative world that Heather has given us.

A new society is forming, Erin is learning to control and fight, her relationship with Aiden is blooming, this doesn’t leave a whole lot of time for actual plot development. We do have some action at times, but the pacing is a bit on the slower side. This is not necessarily bad since the time is spend reinforcing the world and setting up for this supposed upcoming epic battle, but I was craving for more details on this approaching war we keep hearing about. I’m definitely looking forward to seeing what happens with this society and how it will all play out.

The Channeler series so far:

Want to see what I thought of The Secret of Spruce Knoll?
Click here for my review!

I really enjoyed The Secret of Spruce Knoll last year, so I was happy and excited to be part of the blog tour for its sequel, Channeler’s Choice. If you haven’t checked this series out yet you really should, it’s great. I have Heather here today for a quick interview & giveaway, and you’ll have a chance to check out the series!

Following the tragic death of her parents, Eren Donovan moves to Spruce Knoll to live with an aunt she’s never met. Little does Eren know the entire town of Spruce Knoll is filled with “channelers”—a magical group of people who immigrated to the small Colorado town…