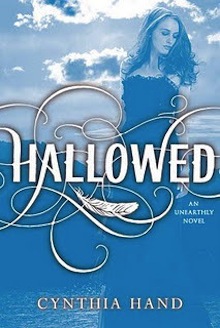 For months part-angel Clara Gardner trained to face the raging forest fire from her visions and rescue the alluring and mysterious Christian Prescott from the blaze. But nothing could prepare her for the fateful decisions she would be forced to make that day, or the startling revelation that her purpose—the task she was put on earth to accomplish—is not as straightforward as she thought. Now, torn between her increasingly complicated feelings for Christian and her love for her boyfriend, Tucker, Clara struggles to make sense of what she was supposed to do the day of the fire. And, as she is drawn further into the world of part angels and the growing conflict between White Wings and Black Wings, Clara learns of the terrifying new reality that she must face: Someone close to her will die in a matter of months. With her future uncertain, the only thing Clara knows for sure is that the fire was just the beginning.

*A copy was provided by HarperCollins for review purposes*
After greatly enjoying Unearthly, I was really excited to be able to get an early copy of this sequel. I was not disappointed with it. It was very much a “middle” book, but one of the best I’ve ever read.

Hallowed gets us reacquainted with Clara, Tucker, Christian and, with a more important part in this sequel, Carla’s brother Jeffrey as well as her mother, Maggie. As in Unearthly, each and every one of the characters have substance, including natural dialogue and palpable emotions. And emotions, Hallowed is full of! Clara and her family are going through a really tough situation and it tugs on the heartstrings. It’s hard to explain without spoilers, but there are a lot of occurrences that will likely make everyone feel sorrowful for Clara. With all these emotions, though, there is still sweet romance and fun moments throughout the book to balance it all out.

As I mentioned, for a middle book, Hallowed is very well done. I was always caught up in the story despite the lack of any definite plot development. We do, however, get a lot of answers in regards to Clara’s lineage. In addition, her mother’s well kept secrets are -for the most part- all revealed. Like Unearthly, Hallowed is not a fast, high action book. The slow but steady pace makes it a highly character driven novel with realistic relationships and an intriguing progression that you have time to savor.

It’s been said that Cynthia Hand has written one of the greatest love triangles in the YA genre. I highly agree with this statement. Hallowed has, yet again, left me feeling dazed.

We’ve got butterflies and sparks, but also uncertainty and pain. The romance itself is not overwhelming; It’s full of authenticity without taking the attention away from the plot. I’m still unsure of how I feel about the new developments in this sequel. I’m definitely curious to see how it’s going to pan out in book 3. Tucker and Christian are both important in Clara’s life. They each have very separate but essential roles that keep her grounded. I think she should marry both – seriously! It could work, no? (Team Tucktian?)

Hallowed is another great example of a wonderfully written paranormal romance. Cynthia Hand does not disappoint with this second novel in the Unearthly series *claps*. If you haven’t picked it up yet, it’s a definite must buy!

Want to know my thoughts on Unearthly?
Click here for my review.