Darrow is a miner and a Red, a member of the lowest caste in the color-coded society of the future. Like his fellow Reds, he digs all day, believing that he and his people are making the surface of the planet livable for future generations. Darrow has never seen the sky.

Yet he spends his life willingly, knowing that his blood and sweat will one day result in a better future for his children.

But Darrow and his kind have been betrayed. Soon he discovers that humanity already reached the surface generations ago. Vast cities and sprawling parks spread across the planet. Darrow and Reds like him are nothing more than slaves to a decadent ruling class.

Inspired by a longing for justice, and driven by the memory of lost love, Darrow joins a resistance group in order to infiltrate the ruling class and destroy society from within. He will stop at nothing to bring down his enemies... even if it means he has to become one of them to do so.

What an intense thrill ride! Red Rising gives us one meticulously built strategy game with a large cast of colorful characters who represent social status in a whole new perspective.

Ultimately, the Red Rising Trilogy is a story of rebellion, and this is its first chapter. Set on Mars, we’re introduced to an intimidating oligarchy government where your color decides your fate. Darrow, a Red – the lowest of the lows – is surgically enhanced to look like a Gold, and here’s hoping he can successfully infiltrate and beat the system. This whole color classification did not have me completely convinced, I will admit. Pinks for pleasure, Golds for “gods”, Reds for slaves and so on. No question that it’s fascinating, even not so far from the racial disparities that we have in our own history books, but I don’t see how such an extreme could be the result of evolution. I was hoping to get a more thorough look at the history behind this new world. Red Rising, however, is really just the beginning.

Darrow has a truly interesting character arc throughout this story. We start off with this grief stricken person who has just about given up on life. Someone who had simple desires and a reluctance to fight. Then we see him transform into this all-empowering force to be reckoned with. An aggressive, yet respected leader. But this is not done without suffering and a few mistakes. For someone to change so drastically you can be sure that there are a lot of ups and downs, pain and hardship. This novel is not for young readers (it’s marketed as adult fiction despite having a teenage MC). It’s violent, harsh, merciless, with brutal lessons learned along the way. What sacrifices would you make to save your people who are suffering unjustly? To avenge a loved one, even? This is a cruel journey that demonstrates a very dark side of humanity. However, it also touches on dignity and loyalty, on what it takes to be a powerful leader with true followers. I found this aspect to be quite thought provoking, even inspiring. Like a cult leader, really. Emotionally, it’s hard to go through Darrow’s journey at times. To see the terribly hard choices he has to make. To see his shell harden – both mentally and physically – because of an act of brutality he was forced into. It does make you really feel for the guy.

This novel is basically a game of strategy. These people are thrown onto a gameboard created to destroy the weak and breed powerful would-be leaders. Don’t plan on going into this mindlessly; this book is intricate with a lot of pieces to keep track of. It involves an abundance of characters, plenty of twists and turns, and a regular change of alliances and allegiances that keep modifying our perspective of certain characters. This is the tricky part that I found to be inherently complex. Many times I had to stop and think through the timeline of events to re-situate myself with a certain character, but its carefully plotted intrigue kept my head in the game. Furthermore, the relationships that develop between each character range from amusing to monopolizing, but all of them are highly compelling. It’s a very character oriented story, which is impressive seeing as how much gameplay it also entails.

Intense, well crafted, and clever, Red Rising is an addictive dystopian that is doused in secrets and betrayals. It’s kind of like a deathly game of Capture the Flag. Also, I loved the map that was wonderfully drawn up to help us visualize the battleground: 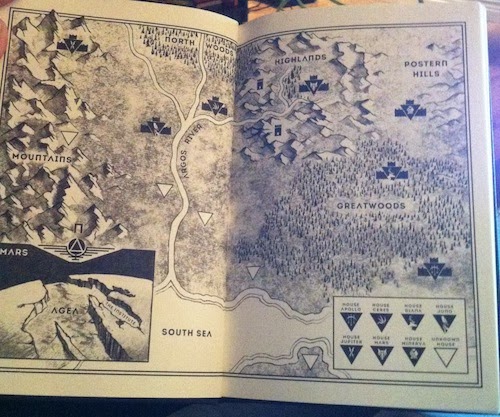 I’ve heard wonderful things about this book so far and I can’t wait to read it myself. And one lucky Canadian can enter to win their very own copy, today, thanks to the lovely people at Random House of Canada.

Random House of Canada has generously offered a finished copy of Red Rising for giveaway.