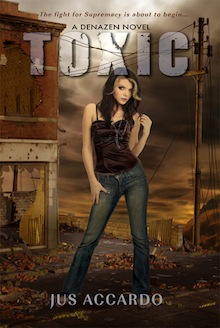 After Dez and Kale got away at Sumrun, her father lost not only his most powerful weapon but an important piece of the Supremacy project. Forced by Denazen to remedy the situation, he poisons Dez and offers her a choice–surrender to Denazen for the cure…or die. Determined to find a solution that doesn’t involve being bagged and tagged–or losing someone she loves–Dez keeps the poison a secret. But when a rash of Denazen attacks hit a little too close to home, Dez is convinced there’s a traitor among them. Jade.

Sacrifices, broken promises, and secrets. Dez will have to lay it all on the line if there’s any hope of proving Jade’s guilt before they all end up Residents of Denazen. Or worse, dead…

Closer to a 3.5 stars, Toxic is the long anticipated sequel to one of my favorites books last year; it was good to get reacquainted with Dez and Kale in this fun, emotional sequel. Dez is back to her full glory, and now she has competition; Jade is here to try to teach Kale control, but she’s also trying to weasel her way into his heart – or at least his pants. If this wasn’t enough, Dez’s immunity to Kale’s touch is waning.

With a wedge… or 2, driven between Dez and Kale, there is a lot of tension in this sequel. Dez’s worst insecurities being brought to light make her a little jealous, and a lot paranoid. She turns from confident to constantly worried to the point of spying. This is not the stubborn, determined Dez I love! I definitely understand where she’s coming from, but the whole situation really grated on my nerves. I hated Jade with such a passion that just her alone definitely put a damper on my enjoyment of this novel. She would always get in the way, or get her way, and it annoyed the hair off of my body! Yes, we are meant to dislike her, but it worked so well on me that I didn’t love the book as much as I would have otherwise, and now I look like Britney Spears.

Moving on. Kale and Alex both have good character growth in Toxic. Since I read Untouched – the novella in Kale’s perspective – I know how his perplexed mind works, this made me understand his decisions better in this book. I love how he’s so innocent, yet incredibly dangerous. We didn’t get as many laughs from his clueless ways, however, which I missed from Touch. Since Kale is so busy with jerkface Jade, we get to know Alex a little more, and I have to say I grew to like him a lot better. In Touch he was the guilty pleasure character, the bad boy that you know you shouldn’t like but you kind of do anyways. In Toxic, we see layers to his character we hadn’t glimpsed at before; his level headedness for example. He has a really strong personality that makes him a great secondary character that balances out the others perfectly.

Even through all the stress and boy troubles, there is still great humor from Dez’s sarcastic attitude, new, unique powers that we get to observe, and a hint of what Denazen has up their sleeves. It’s a lot more about the characters than the plot itself which makes this sequel a lot less action packed. We do go through a lot of emotional ups and downs, and ultimately get a feel of what the third book will bring with some intriguing developments that come forth.

Touch still remains one of my favourite novels, the easy writing style and a steady pacing continues in Toxic, making it a very fun read regardless my dislike of a certain… person. I’m just going to hope she dies miserably in the third installment. You will do that for me, right Jus? 😀