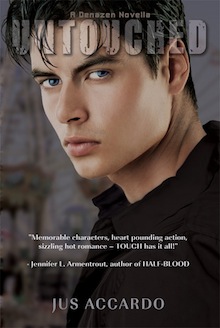 Until he met Dez, Kale’s days were filled with violence and death. He was used as a weapon of destruction by the power hungry men of Denazen. He’s a Six. A person with an abnormal ability. Some people call them gifts, but not Kale. Kale’s touch means instant death.

But now there’s Dez, the girl he can touch, and they’re hunting down Sixes and warning them about Denazen. Kale is learning about the world outside captivity and trying to put his dark past behind him. But they underestimated how badly Denazen wanted him back.

When Dez sacrifices herself to save the new Six they’d rescued from falling into the corp’s hands, Kale is lost. Denazen has brought out its best to get the job done. Samsen, a nightmare from Kale’s past—the only person he’s ever truly feared—has come for them, and it soon becomes obvious he has his own twisted agenda.

Kale will need all his training to get Dez back and ensure they make it out, free—and alive. But will it be enough?

*A copy was provided by Entangled Publishing for review purposes*
Kale is a character like no other. Being imprisoned by Denazen his whole life, he never got to learn social behavior. Social skills and etiquette are completely lost on him. He doesn’t understand slang or why people lie. He gets bewildered by elementary things. It’s sad in a way because of what he went through, but it’s strangely fascinating to see how human behavior is perceived to such alien eyes – and not to mention terribly amusing. You gotta admit, a lot of the things we say and do ARE bizarre when you sit down and think about it.
“She was excited. To be rolling around in colorful balls.”
-Quote from Kale while in a ball pit with Dez


In this novella, we get a delightful look inside this unfledged mind. However, it’s not an unperturbed one. Kale went through a lot of mental abuse. Being used as a prosecutor and torturer, imprisoned and isolated; he’s not completely stable. We get a glimpse of the darkness inside of him. I truly enjoyed getting to know him better; I now understand his way of thinking, as well as what he went through. What he’s still going through. And of course, we also see how madly in love he is with Dez, which is absolutely adorable. The romance in Touch is one I highly enjoyed that has passion and substance. Untouched simply ascertains this by showing us Kale’s candid feelings for her.

Novellas are always fun to bridge the gap while waiting for the next installment but aren’t always important. Untouched has us delving into Kale’s mind where we get to understand HIS world, thus it does have considerable character development that makes it a highly recommended read for fans of the series. Even if you don’t usually read novellas, if you want to have a bigger grip on this complex character, don’t skip on this one!

Have a look at what I thought of book 1:
Click here for my review of Touch!

Have you entered to win a copy of either Touch or Untouched?
Click here!