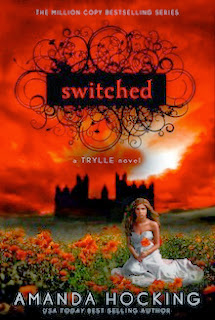 When Wendy Everly was six-years-old, her mother was convinced she was a monster and tried to kill her. It isn’t until eleven years later that Wendy discovers her mother might have been right. With the help of Finn Holmes, Wendy finds herself in a world she never knew existed – a world both beautiful and frightening, and Wendy’s not sure she wants to be a part of it.

Trolls! I know, right? Flashy colorful hair, so-ugly-they’re-cute dolls we all had at one point? In Amanda’s world, these are all misconceptions. They’re called Trylle, and they’re beautiful, magical and on the brink of extinction.

With an entirely unique lore, Switched is able to stand out from all the other paranormal books available. I was fascinated by the Trylle mythology: How they lived, the monarchy, their custom of switching babies at birth. It was absolutely creative. Into this world comes a collection of commendable characters that are both well developed and easily likeable – even a select few that are fun to hate. Wendy has a big personality. She’s had a difficult, traumatic childhood, but that only made her stronger for the wear. She doesn’t let anyone manipulate her. She’s sympathetic and kind. All of which make her really relatable. I enjoyed going through her dilemmas with her. The stressful demands of becoming a princess overnight, the boy she’s falling for- it was all delightful. Almost like a modern day fairy tale.

Yes! The wonderful boys! From sweet to sweaty, Wendy has got more than her pick of lovely bachelors to chose from. I absolutely loved how the romance was played out in Switched. It’s passionate and heartbreaking. It doesn’t fall with the clichés of today’s YA novels. It’s unexpected – true to life. Truthfully, I devoured it and I can’t fathom choosing a team. She can have them all, right?

While there is still good story development, I did find some parts of the book were a bit slow. A good portion is dedicated to character and world building, however the book does not completely suffer from “first book syndrome” it does have its own beginning, middle and end, but I think the rest of the trilogy will be much more action packed with powerful plot twists.

With this admirable debut, Amanda Hocking has begun a trilogy that has immense potential. Switched is just as beautiful inside as it is on the outside (definite cover lust) and I highly recommend it!