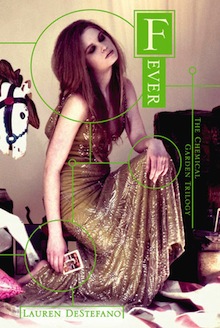 Rhine and Gabriel have escaped the mansion, but danger is never far behind.

Running away brings Rhine and Gabriel right into a trap, in the form of a twisted carnival whose ringmistress keeps watch over a menagerie of girls. Just as Rhine uncovers what plans await her, her fortune turns again. With Gabriel at her side, Rhine travels through an environment as grim as the one she left a year ago – surroundings that mirror her own feelings of fear and hopelessness.

The two are determined to get to Manhattan, to relative safety with Rhine’s twin brother, Rowan. But the road there is long and perilous – and in a world where young women only live to age twenty and young men die at twenty-five, time is precious. Worse still, they can’t seem to elude Rhine’s father-in-law, Vaughn, who is determined to bring Rhine back to the mansion…by any means necessary.

In the sequel to Lauren DeStefano’s harrowing Wither, Rhine must decide if freedom is worth the price – now that she has more to lose than ever.

*A copy was provided by Simon & Schuster Canada for review purposes*
An improvement over Wither – Fever starts exactly where we left off in the midst of the excitement from having escaped. The issue I had with Wither lacking energy, where I had a feeling of restlessness being with those girls in their big mansion unmoving, is not the case anymore. In Fever, we’re out in the real world. Things are moving fast and the anxiety is heightened. As a lover of fast paced dystopians, I found myself much preferring this second installment.

We’re following Rhine and Gabriel on the run. Rhine is trying to find her brother, while Gabriel is seeing the outside of the Mansion for the first time in a decade. As in Wither, I didn’t feel a lot of chemistry between these two. They are clearly good for each other; always there to help one another, but there’s no rooted passion between them. Fortunately, the plot doesn’t center around the romance as much as their escape and, eventually, what’s happening to Rhine. She’s started getting sick with the same symptoms as the virus. No one knows why, or how to fix it.

Although it’s still not at the scale I was hoping, we do learn more about the outside world in Fever. Rhine and Gabriel travel enough to give us glimpses of society’s living situations. We also hear the president give an interesting speech of future plans. Furthermore, we get some good plot development as well as a lot of mystery throughout the novel. The twists we encounter definitely came to impress me. They are very well thought out from the beginning, put together in a way that makes them hard to predict. I, for one, had no idea what was happening and was caught smiling by the cleverness of it all by the end.

I noticed an improvement in the writing from Wither. It’s more vibrant, and the story flows really well with an easy to read, but sophisticated prose. It’s beautiful in a sense. There is also a sequence where Rhine is drugged, going in and out of consciousness, that I thought was brilliantly done. I felt as confused as Rhine was. Trying to figure out what was happening along with her. You get the sense of unease like in a dream where you know you must escape, but you’re trapped, controlled. It’s suspenseful and frightening.

A much more fast paced, captivating dystopian than the first in its series- Fever continues Rhine’s story while her years dwindle by. With only 3 of them left, Rhine has a lot of life left to live in a very short time. I’m looking forward to finding out how she spends these in the final book of the series!

Want to know what I thought of Wither?
Click here for my review!