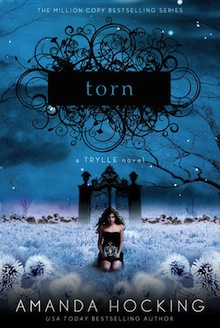 When Wendy Everly first discovers the truth about herself–that she’s a changeling switched at birth–she knows her life will never be the same. Now she’s about to learn that there’s more to the story… She shares a closer connection to her Vittra rivals than she ever imagined–and they’ll stop at nothing to lure her to their side.

With the threat of war looming, her only hope of saving the Trylle is to marry a powerful royal. But that means walking away from Finn, her handsome bodyguard who’s strictly off limits…and Loki, a Vittra prince with whom she shares a growing attraction.

Torn between her heart and her people, between love and duty, Wendy must decide her fate. If she makes the wrong choice, she could lose everything, and everybody, she’s ever wanted…in both worlds.

*A copy was provided by St. Martin’s Press for review purposes*
In this second installment of the Trylle trilogy, we reunite with Wendy inside this strange new world she’s still digesting. It’s an honorable sequel with a lot of world building, plenty of characterization, and enough twists to keep you enchanted until the end.

Let’s start with the world building. In Switched, we’re introduced to this new race of Trylle. We meet the queen, we visit the kingdom and we learn where Wendy fits in all of this. Now, in Torn, we go deeper. We learn a lot more about the politics of the Trylle as well as of the Vittra. We get a bigger look at what the future will have in store, not only for Wendy, but for the whole Trylle race. It’s clear that this world was made with great effort. Everything is very complex with careful forethought. The story itself, which starts off thick on the action, quickly dwindles down to a smoother course where we concentrate more on plot development. Even though it’s not constantly intense or heart pounding, there is enough going on throughout the book to make it easy to fly through it.

We meet again with the wonderful characters from Switched, accompanied by some new faces who are equally endearing. We’ve had Finn, the sweet, selfless one. Now comes Loki, the willful, irresistible bad boy. He is a great addition to the cast who is quickly becoming my favorite of the male characters. As for our protagonist, Wendy, she has grown from the previous novel. She’s more feisty, and has finally started putting her foot down – particularly when it comes to her mother. She also has her brother, Matt, by her side this time. He’s a great cornerstone for Wendy and can always be counted on to stand by her. She definitely needs this rock in her life, especially now with Finn acting so cold and moody – which I was a bit disappointed by; I was hoping the passion from Switched would remain, but Torn doesn’t hold an abundance of romance. However, there is a new “flirtation” developing that is quite intriguing! It has a forbidden fruit temptation that always gets me enamored.

A delightful sequel- Torn brings us deeper into this world full of trolls and battles; romance and controversies. I strongly suggest you get St. Martin’s published copy of this, if not for the beautiful cover, then for the never before published short stories at the end. These takes us into the minds of three of the well loved male characters. And I can assure you, they are well worth it!

Want to know what I thought of Switched?
Click here for my review!