The Embrace blog tour is dropping by the blog today and we’ve got lots of great stuff for you guys! First there’s my review *cheer*, then a fabulous guest post by Jessica Shirvington *cheer louder*, and to top it off, a fantastic giveaway for a finished copy! *the crowd goes wild* 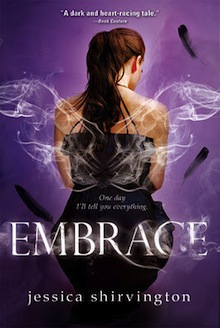 It starts with a whisper: “It’s time for you to know who you are…”

Violet Eden dreads her seventeenth birthday. After all, it’s hard to get too excited about the day that marks the anniversary of your mother’s death. As if that wasn’t enough, disturbing dreams haunt her sleep and leave her with very real injuries. There’s a dark tattoo weaving its way up her arms that wasn’t there before.

Violet is determined to get some answers, but nothing could have prepared her for the truth. The guy she thought she could fall in love with has been keeping his identity a secret: he’s only half-human—oh, and same goes for her.

A centuries-old battle between fallen angels and the protectors of humanity has chosen its new warrior. It’s a fight Violet doesn’t want, but she lives her life by two rules: don’t run and don’t quit. When angels seek vengeance and humans are the warriors, you could do a lot worse than betting on Violet Eden…

*A copy was provided by Sourcebooks for review purposes*
This is one of those books that as soon as I read the synopsis, I was instantly attracted to it. Mysterious tattoos, dream injuries, good vs evil battles – it definitely caught my attention. Sadly, I didn’t fall love with it, but it’s still a fun book full of plot twists that kept my attention throughout.

Violet is our main character, she’s just learning that there’s a whole world out there she didn’t know existed, and she’s right in the middle of it all. She is one of those characters that is easy to like, with confidence and independence. I liked how she handled herself in tough situations, but not in her relationships. Both guys are undoubtedly hot, and I liked how they didn’t beat around the bush with their attraction to each other, but the love triangle is particularly cliché. We’ve got Lincoln, the good guy, who she loves with all of her heart but, of course, it’s impossible for them to be together. Then we’ve got Pheonix, the bad boy, who loves her more than she loves him. Even though there was great chemistry between them and Violet, I found both guys bland- personality-wise. There were also a few things I questioned. She seemed to put all of her trust in Pheonix who is unquestionably manipulative, and obviously filled with dark secrets. She was blind to things that were simply sensical to anyone else. As for Lincoln, I loved his character at the start, but his appearance in the book becomes scarce after the first quarter so we don’t get to know him very much. Regardless, I won’t deny the romantic scenes are filled with passion and lust.

The intriguing plot is what I enjoyed the most about this book. Angel stories have rarely impressed me, thus I’m happy that the original lore in Embrace had me constantly curious to find out more about these angels and their conspiracies. In addition to being beautifully written, the novel introduces twists that are well thought out, as well as clever. We’re left with a sense that nothing and no one is to be trusted in this world; it’s intense and a bit unnerving. There are a few details I disbelieved in the story, though. How her best friend easily believes her when she explains she is part angel -in a food court no less, or how her dad acts oblivious, even neglectful towards his 17 year old daughter. I also never caught on to why it was forbidden for angel “teams” to be together. While I love forbidden romance, I like to know why it is so.

Fresh and enticing, Embrace is a delightful angel novel that, even though I didn’t absolutely love it, I’d still recommend to fans of paranormal books who enjoy a fast paced, intriguing story, with an abundance of romance, betrayal and secrets.

Falling in Love at 17

At 17, life is about new experiences. It is about self-discovery, friends, adventure, mistakes, career and university choices. And let’s be honest, there are not many 17 year olds out there that aren’t interested in falling in love.

But how many are truly interested in falling in love with THE ONE at 17?

I’m not sure I was. In fact, I probably wasn’t. I was planning to take the world by storm – solo. So when I met Matt, well, actually … it was pretty darn amazing. But it was a little frightening too.

When we first got together, it was sweet and young and … perfect. I was head over heels. But things became complicated quickly. He was an up and coming athletic star and I was working in hospitality. So basically he worked hard in the day, and I worked hard at night. His lifestyle demanded routine and healthy living, mine … not so much. But we were determined to make it work.

Falling in love so deeply at a young age made it difficult to be as reckless as our friends. We watched them coast in and out of short, fun, but meaningless relationships and it just seemed so different to what we had.

Writing the Embrace series has been an opportunity for me to pour some of the incredibly intense emotions of young love into Violet’s story. It has been important for me as a writer, and a person, to recognize that it’s completely realistic for someone at her young age to experience the full effect and heartbreak of love. Violet is one hundred percent invested with her heart. She makes bad choices, but we have to. She regrets many of her decisions, because we all do. And she fights for what she loves, because she is compelled to. Violet’s story is unique to her, I don’t pull on parallel scenarios from my own life, but I do pull on the emotion of intense love. Love that I think adults sometimes forget that 17 and 18 years-olds are very capable of feeling.

I often find one question helps a lot of adults, who maybe disagree with this view, to be more open minded: Do you remember you first true love? Do you ever wonder what your life would’ve been like if you had stayed together? For some, the answer is a resounding NOT INTERESTED, but for others … the pause says it all. Jessica Shirvington is the author of THE VIOLET EDEN CHAPTERS also known as THE EMBRACE SERIES. An entrepreneur, author, and mother living in Sydney, Australia, Jessica is also a 2011 finalist for Cosmopolitan’s annual Fun, Fearless Female Award. She’s also one of the lucky few who met the love of her life at age seventeen: Matt Shirvington, a former Olympian and current sports broadcaster for FOXTEL and Sky News. Married for almost eleven years with two beautiful daughters, Sienna and Winter, Jessica knows her early age romance and its longevity has definitely contributed to how she tackles relationships in her YA novels. Previously, she founded a coffee distribution company, Stella Imports, in London, and before that was involved in the management of restaurants Fuel Bistro and MG Garage in Sydney. Jessica is now a full-time novelist and living her dream.

Sourcebooks Fire has generously offered 1 finished copy of Embrace for giveaway
Open to US and Canadian addresses
Giveaway ends March 19th, 2012
Use the Rafflecopter below to enter