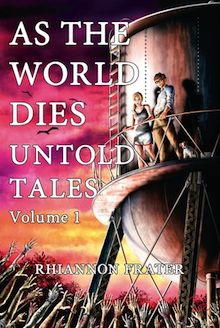 THE FIRST DAYS: AS THE WORLD DIES introduced Jenni and Katie and their harrowing journey to the makeshift fort in the Texas Hill Country.
But theirs is not the only tale to be told.

On a deserted highway slicing through the desolation of West Texas, a woman struggles to survive as she faces the horrifying aftermath of the rise of the zombies…

And finally, discover what happens on the first day to Katie’s beloved wife, Lydia, as the world dies…

I will never get enough of this series.

With its extraordinary characters that all left a mark on my heart, and a story that kept it beating hard – As the World Dies by Rhiannon Frater has become one of my favorite series ever (and it’s a short list). Thus, I rejoiced at the idea of the Untold Tales, where she takes us into the lives of different characters prior to their appearance in the original series.

In this volume, we get familiar with the stories of Lydia, Monica and Eric. Lydia is a significant character in the whole trilogy. Even though she is dead from the start, she has a huge influence on Katie’s thoughts and decisions. She’s the reason for Katie’s unrelenting determination and strength, not only to survive, but to rebuild, to love again. I loved finding out what exactly happened in her final moments, as well as getting a glimpse at their previous lives together. It was truly bittersweet. As for Juan’s cousin, Monica, she is a character I felt I never really got to know, so it was great to get a sense of who she is. Even though these stories are short, they’re definitely still intense, with an abundance of emotion.

Eric’s story is quite a bit longer. He is also a character that, although present quite a bit, I craved to know more about. What he went through before the fort is terrifying; we see him struggle with heartbreak, loneliness, and of course, zombies. I feel like I know him SO much more – so much so that a re-read of this series is forthcoming! Additionally, Eric’s story is filled with cameos of other well loved character that gave me an immense feeling of nostalgia to the point of tears. It’s like there were all these precious moments that was previously missed due to all the chaos of the first days, and now we get to see it, to live it.

Even if, like me, you don’t generally read short stories, do not look these over – especially if you’re already a fan of the As the World Dies series. They are filled with as much humor, love, horror and thrill as the full length novels. If you’re new to this series, you will get to glimpse Rhiannon’s impeccable talent of leaving you on the edge of your seat, while making you ADORE these characters completely.

You can win an advanced copy of Siege HERE
The following two tabs change content below.

16 Responses to “Review: As the World Dies: Untold Tales Vol 1”