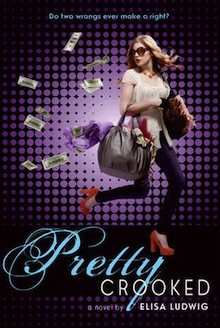 Willa’s secret plan seems all too simple: take from the rich kids at Valley Prep and give to the poor ones.

Yet Willa’s turn as Robin Hood at her ultra-exclusive high school is anything but. Bilking her “friends”-known to everyone as the Glitterati-without them suspecting a thing, is far from easy. Learning how to pick pockets and break into lockers is as difficult as she’d thought it’d be. Delivering care packages to the scholarship girls, who are ostracized just for being from the “wrong” side of town, is way more fun than she’d expected.

The complication Willa didn’t expect, though, is Aidan Murphy, Valley Prep’s most notorious (and gorgeous) ace-degenerate. His mere existence is distracting Willa from what matters most to her-evening the social playing field between the have and have-nots. There’s no time for crushes and flirting with boys, especially conceited and obnoxious trust-funders like Aidan.

But when the cops start investigating the string of burglaries at Valley Prep and the Glitterati begin to seek revenge, could he wind up being the person that Willa trusts most?

*A copy was provided by HarperCollins for review purposes*
Ever since enjoying Elisa’s self-published novel June of Rock, I’ve been looking forward Pretty Crooked; with its fun, quirky cover and synopsis, I had high hopes for it. I wasn’t expecting such a fluffy story, but I was glad to find it an enjoyable, quick read, nonetheless, that reminded me a tad of Mean Girls.

Willa only wants to even out the score by stealing from her rich friends, and giving to her poorer ones. Although a bit far fetch, the plot is pretty amusing. Coming from a small town where there are no private schools or “higher society”, I’m always captivated by their inner workings. Grand living situations, unlimited shopping, privileged attitude; it’s so much fun to read about! Even though I can’t say Willa is particularly smart in her proceedings, I really liked her and could easily understand where she was coming from by wanting to even the playing field. In between her mischief, Aidan is the main male character that Willa is crushing on. No doubt he’s charming, but I simply didn’t see it. He is the definition of a player, plus he’s so incredibly snobbish I couldn’t root for him at all. I much preferred Tre, and I don’t know why Willa doesn’t feel the same. A bit too naive maybe? Either way, the romance didn’t convince me, fortunately its presence in the book is scarce.

In addition to the teenage Robin Hood storyline, we’ve got suspicious parental behavior by Willa’s mother; late nights and strange meetings. I was deeply curious to find out what exactly was going on. It feels ominous, as well as more interesting than your cliché “affair” or “re-appearing father” scenario. Sadly, this is left greatly unresolved since, unbeknownst to me, Pretty Crooked is the start of a series. I guess I should have taken notice, regardless, I still feel like we should have gotten some kind of answers, at the very least an elaboration. Instead it’s merely floating in the background bugging like a constant itch that, ultimately, never gets scratched. It surely tugs on my love of mystery, though, leaving me craving for book 2!

If I had to pick I would recommend Elisa’s June of Rock over this one, but Pretty Crooked is, nevertheless, a fun little quirky tale that is perfect for a light read.

Want to know what I thought of Elisa Ludwig’s June of Rock?
Click here for my review!