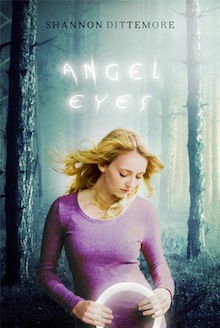 Once you’ve seen, you can’t unsee. Everything changes when you’ve looked at the world through . . .

Brielle’s a ballerina who went to the city to chase her dreams and found tragedy instead. She’s come home to shabby little Stratus, Oregon, to live with her grief and her guilt . . . and the incredible, numbing cold she can’t seem to shake.

Jake’s the new guy at school. The boy next door with burning hands and an unbelievable gift that targets him for corruption.

Something more than fate has brought them together. An evil bigger than both of them lurks in the shadows nearby, hiding in plain sight. Two angels stand guard, unsure what’s going to happen. And a beauty brighter than Jake or Brielle has ever seen is calling them to join the battle in a realm where all human choices start.

*A copy was provided by Thomas Nelson for review purposes*
Angel books are not a rarity nowadays. I have read my share and even though this one didn’t absolutely wow me, I enjoyed it for the most part. It starts to feel long, plot-wise, after a bit, but the characters are engaging and the angel lore is enticing.

My immediate thought was that this was going to be the same old – full of clichés – kind of story. We have Brielle moving back to her old town, starting school and meeting the gorgeous new guy who, to her surprise, seems to be into her. Sounds familiar? It’s not a very unique start, but as the story progresses it does get a lot more original with some surprising elements and, amazingly, no love triangle. I was also quite surprised by the direction of the heroine herself. I had imagined the usual cookie cutter plot where the protagonist finds out she’s really an angel, so I was happy to get a different sort of twist that kept this story fresh. Brielle is a well-rendered character with raw emotions. I found her easily relatable as she’s an average Joe but with a heavy, mysterious past that I was kept captivated by. The story itself alternates from a few different POVs, including the villain’s which I always find intriguing as we get the anticipation of seeing their plans unfolding. I did find it sometimes got distracting, however, especially at the beginning where I felt flopped around from side characters I wasn’t connecting with. But It does leave us with a deeper understanding of their whole world.

Jake could be seen as Brielle’s savior. In him she finds a companion to whom she is able to open up to and move on from a place of sorrow and grief. It’s a sweet, natural relationship that I would simply call nice. It’s not filled with pulse pounding chemistry, nor is it monotonous, it’s the kind of relationship where they just fit, balancing one another. It’s not swoon worthy but it’s satisfying.

Struggling with the death of her best friend, Brielle is questioning her faith and the existence of God. From someone who is not religious I wasn’t too enthused by the strong religious undertone in this novel. Nevertheless I understand the importance of its addition in the story; it serves its purpose. Obviously, being an angel book I was expecting it, but this one can get particularly heavy in that department. I also appreciated that it doesn’t force any belief system on the reader. It’s merely commonly asked questions and reflections by someone who has been through such a devastating loss like Brielle.

There’s not a whole lot that you can do to make angel lore original while keeping it inside common beliefs. Dittemore does stray from the usual notions, but by re-imagining, not necessarily recreating. The realms, the spiritual warfare, the angel’s purpose, and my personal favorite – the halo, all have the common assumptions at their core, but with an added creative flair to leave it mysterious with some exciting twists. I thought it was all wonderfully described, keeping me fascinated – which has not been accomplished by many angel books to be honest. The pacing itself could have been better, especially at the beginning and end. It takes a while before we start getting some answers, then the ending feels overly prolonged. Otherwise, though, it flows nicely.

An enjoyable addition to its genre, Angel Eyes delivers beautiful angel lore with three-dimensional characters. Even though it didn’t absolutely enchant me, fans of Angel stories will most likely find this one surprisingly up to par with the most recent popular angel titles today.

Giveaway
As part of the blog tour, an ebook copy of Angel Eyes was donated for giveaway to one of my readers.