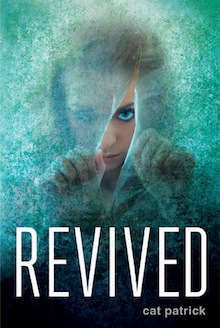 As a little girl, Daisy Appleby was killed in a school bus crash. Moments after the accident, she was brought back to life.

A secret government agency has developed a drug called Revive that can bring people back from the dead, and Daisy Appleby, a test subject, has been Revived five times in fifteen years. Daisy takes extraordinary risks, knowing that she can beat death, but each new death also means a new name, a new city, and a new life. When she meets Matt McKean, Daisy begins to question the moral implications of Revive, and as she discovers the agency’s true goals, she realizes she’s at the center of something much larger—and more sinister—than she ever imagined.

After dying 5 times, Daisy is kind of tired of it all. Having to relocate each time: a new school, new routine, new last name – a whole new life. It gets tiring after a while not getting to keep your identity. An interesting plot with a fast pace and short chapters, Revived is surprisingly easy to fly through.

Revived is the drug that can bring people back to life. This drug has been secretly tested on a few kids – Daisy included, and controlled by an anonymous eerie guy they call God; his agents – the disciples; and the subjects – converts. We did not delve into this secret project much more than this. Consequently, you can’t look into it too deeply without raising questions. Mostly whys and hows. This could have been fine if it was the first in a series where we would still have a chance to examine this further, but for a standalone I felt the information was scarce. Likewise, the promised sinister goals don’t feel as sinister when we only vaguely know about these people. But there are some fun, though not unpredictable twists, which gives an overall entertaining plot. However, regardless of the synopsis, this book reads more like a contemporary with some added supernatural events so this doesn’t become a very big problem.

The characterization is what makes it the most engaging. Daisy has a very relatable voice that you can see grow inside this book when she develops relationships with Audrey and Matt, her first real friends. Being able to come back to life has given her a nonchalant attitude about death. So when faced with real, no coming back, death, she’s at a loss. Suddenly, everything is being doubted. Is the Revive project really a positive thing? Is it fair that she can cheat death? We touch base on a lot of subjects: From death, to experiencing her first love, to her amazing relationship with her “fake” father – I could feel her joy and her pain. We see her at her best, but also at her worse; making her an intricately written character.

Falling in love for the first time is bliss; but it’s also confusing. The romance plays a pretty big part in Revived. Daisy and Matt develop a believable and truly sweet relationship. Like any teenage romance, there are bumps in the road; the ones in this story are particularly steep. Although clever and undeniably loving, Daisy may be a bit too trusting. I was surprised by how quick she gave away her enormous secret to her boyfriend. Maybe it’s just simple naivety, but after keeping it for so long she was quick to spill the beans. It was definitely not the smartest idea.

Quick and entertaining, Revived is filled with compelling characters that will lead you in a fun, but also emotionally-profound story. It’s a delightful read that I would recommend if you enjoy contemporary novels with sci-fi elements.