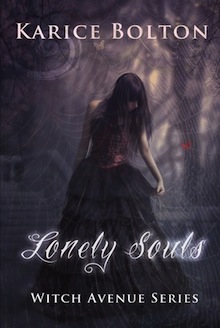 It’s two weeks before Triss turns 18, and her world is about to change into the most magical one imaginable as she readies herself to enter The Witch Avenue Order… that is until her mother’s disappearance. Instead of celebrating her transformation, she finds herself spreading rose petals into her mother’s empty grave.

When Logan, her best friend from junior high, moves back to town for college, he vows to help her find the answers she so desperately seeks surrounding her mother’s disappearance. As they begin uncovering clues, it becomes apparent that the life of white magic they both grew up loving is not what the majority practices, and their lives are in danger.

With a haunting feeling that her mother may still be alive, she begins to hear a call to the wilderness. Triss realizes that in order to find the answers she needs, she must learn the ways of her ancestors and become the hunter, not the hunted before it’s too late, and she becomes part of the lonely souls.

Lonely Souls first attracted me by its gorgeous cover, even moreso by its mention of witches. I love witches and all their potential. I love spells, magic, and how books on the subject can be fun, fierce, and original. Even though I wish there would have been more “witchiness”, Lonely Souls has an intriguing premise with great characters and a sweet romance.

When her mother disappears, Triss will not accept that she’s dead. And if her mother’s disappearance wasn’t enough stress on her shoulders, she has to deal with evil beings that are appearing, and a less than welcoming coven. Intelligent and caring, Triss is a fun character that doesn’t let people walk all over her, nor does she let a crush on a boy take over her smarts. I really enjoyed her and Logan’s relationship throughout. They’re lifelong friends who are obviously attracted to each other, but the romance is kept slow and sweet. I was pleased by how they don’t let lack of communication get in the way. They talk and discuss how they feel. I thought this made it all very mature and, in consequence, a relationship that I could easily root for. Logan himself is definitely swoon-worthy. He knows when to say the right things, he is incredibly sweet and understanding; he’s just an all around great guy – though not unrealistically so.

With a fast start, we’re thrown into a very intriguing premise of witches, secrets, and magic. I was easily caught up in the plot, excited to find out what it would lead to. Soon, however, it turns into a more romantic paranormal story, concentrating on Triss and Logan’s relationship. As I mentioned, the romance is wonderful. Nonetheless, I was hoping for a bit more development in the plot itself. I felt as if it didn’t advance very much at all. There are some good battle scenes and a few secrets revealed, but there are also a lot of plot deviations – dinner dates and repeat conversations – which keeps it from progressing. I was also expecting a broader view of the witch lore – their coven, background, abilities, etc. In general, I anticipated a lot more to happen. What we did perceive of the plot is very interesting and this could end up being an overall amazing series. So in no way was I dissatisfied with it, just maybe a tad underwhelmed.

It’s romantic and it’s sweet; Lonely Souls is perfect for those who love paranormal YA novels with a strong romantic subplot, an original premise, and an easily likeable protagonist. 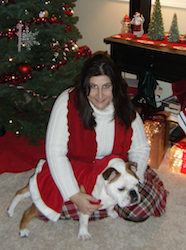 Karice Bolton is a paranormal romance/urban fantasy author living in the Pacific Northwest. All three books in The Watchers Trilogy are available now, Awakening, Legions, and Cataclysm. Lonely Souls, which is the first book in her new series Witch Avenue, released June 2012. Karice married the love of her life who she met in high school, and she still can’t get over how cute and funny he is. They have two English Bulldogs that are the cutest bullies in the world, and they use their cuteness to get what they want. Karice loves the snow and gravitates towards the stuff as often as possible! She enjoys skiing and tries really hard to snowboard, but often makes a nice little area to sit while everyone zips by on their board. She enjoys writing, and she also loves to read just about anything with print.