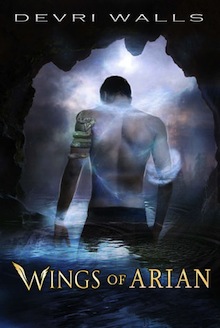 *A copy was provided by Devri Walls for review purposes*
As fantasy is not my favorite genre I went into this with a bit of wariness. Wings of Arian is very much a fantasy with kingdoms, dragons, prophecies, and magic. While it failed to completely enrapture me, I blame this on personal taste rather than flaws in the book itself. Not saying it’s flawless either, but it is a good story with a lot of creativity, so readers who enjoy high fantasy would most likely find themselves much more in-tuned with this one than I did.

Kiora is the Solus. She’s the one who is supposed to save her people with her unyielding magical abilities that scare her as much as everyone she accidentally maims. She’s not perfect and she’s constantly doubting herself, including her abilities. I enjoyed her character, she’s likeable and easy to root for. Although I did have a hard time truly feeling her as we don’t get a lot of character building. We don’t get to know her on a personal level; her past and her personality are not developed enough for me to be able to really understand her, or her reason for ending up where she is at the moment – literally and emotionally. So, sadly, she does feel kind of flat in that respect, but her kind and caring manner makes it easy to care about her throughout the story. We also have Emane by her side to bring in some charming, oftentimes amusing, exchanges. Like Kiora, I didn’t find Emane especially well developed, but he does have a louder personality that is easier to connect with. As for their relationship, it’s a tad instant, but sweet and simple with a refreshing lack of angst.

When Kiora decides to embrace her calling as a Solus, we embark on a journey full of wonder and pain. There’s a lot of training to develop her magical abilities and even though they are very straightforward powers, I did find them creative and enchanting. I loved the remarkable possibilities these people have with their magic, as well as the creatures involved. Dragons, shape shifters and pegasus are only a few of the magical beasts we have the pleasure of meeting. The dragons being my personal favorite with an interesting history to boot. Of course, there’s an evil counterpart. Dralazar is the villain of this novel who is claimed as being the ultimate evil. If I’m being honest I don’t think I completely understood the whole reasoning behind Dralazar. What he’s trying to accomplish was lost on me so I never felt very intimidated by him. Though I will say the fight scenes are intense with a lot of bloodshed that makes the whole book feel more sinister, more serious. People die, betrayals are revealed; I eat this stuff right up!

For a debut novel the writing is good; it has an easy to follow pace with an interesting plot. I think a solid backstory, deeper characterization, with some unnecessary parts shaved off to save length would definitely have strengthened my enjoyment of this novel. Readers who enjoy high fantasy may want to give Wings of Arian a try as they would most certainly consume it with more passion than I did.

Devri Walls: lives in Kuna Idaho with her husband and two kids. She has worked as music teacher and currently, a preschool teacher. She majored in theater and her love of a story still drives her today. Thankfully, she has ﬁnally found an outlet for all the voices in her head. Her ﬁrst novel, Wings of Arian, will be released on Amazon May of 2012. 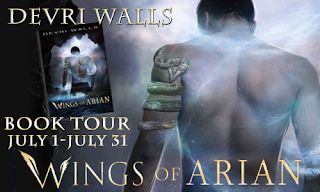 Open internationally
Giveaway ends July 12th, 2012
Use the Rafflecopter below to enter
a Rafflecopter giveaway