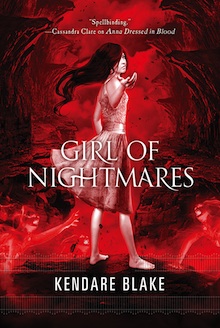 It’s been months since the ghost of Anna Korlov opened a door to Hell in her basement and disappeared into it, but ghost-hunter Cas Lowood can’t move on.

His friends remind him that Anna sacrificed herself so that Cas could live–not walk around half dead. He knows they’re right, but in Cas’s eyes, no living girl he meets can compare to the dead girl he fell in love with.

Cas doesn’t know what happened to Anna when she disappeared into Hell, but he knows she doesn’t deserve whatever is happening to her now. Anna saved Cas more than once, and it’s time for him to return the favor.

*A copy was provided by Macmillan for review purposes*
This is one example of a book I would read for the cover alone. Heck, slap this cover on a 9000 page Spanish history book, and I will read it ALL! Even though I don’t know Spanish >.< Luckily, what's inside this cover is just as incredible as the outside and will leave you equally spellbound!

It was clear from the beginning that Anna was not going to be as big a character as in the first novel. I was a bit disappointed at first because Anna is fabulous and crazy, but I can assure you that her absence is filled so formidably that you will not be left with any longing for her. She’s not completely absent either, she has her way of making herself present in the story. Cas, though, he’s still there in his full glory. He’s got a fabulous sense of humor and incredible charm that fill the pages yet again. His loyalty to his friends, the determination behind his wants; it’s admirable and makes him a positively strong, enchanting character. He’s definitely kept his place as my favorite YA male protagonist.

Along with Cas, comes the laughs. (This was a totally unintentional rhyme, I swear!) It’s really one of my favorite aspects of this series: How Blake can easily blend in laugh-out-loud funny dialogue inside such a creepy, dark story is a great feat! It makes it not only scary, but just plain fun and entertaining, too.

“Every time I question him about the feasibility, he smiles at me like he’s Yoda and I’m just a dumbass without the Force.”
-Quoted from the uncorrected proof.


Aiding him in his mischief, Carmel and Thomas are worthy of mention as two fantastic supporting characters that have just as much soul in this series as Cas himself. The group dynamics make them a powerful trio and I was pleasantly surprised by the direction Blake takes them in this sequel.

In Anna Dressed in Blood, the plot was creepy and horrific. In Girl of Nightmares, it is turned up a notch. Although it may be a tad less creepy, I felt much more afraid in this one; it has a more serious, all encompassing tone. The vibe is more sinister and the scary parts are downright terrifying. Let’s just say, things get pretty out-of-hand-serious. I loved it. I’ve been a fan of horror my whole life and while I truly enjoyed the first book, I completely fell in love with its sequel!

As for the ending: Perfection! True, immeasurable perfection!

An absolutely thrilling sequel that will render you speechless in awe, Girl of Nightmares is filled with compelling characters and spine-chilling events. Fans of Anna Dressed in Blood will not be disappointed!

Find my review of Anna Dressed in Blood here!

52 Responses to “Review: Girl of Nightmares by Kendare Blake”