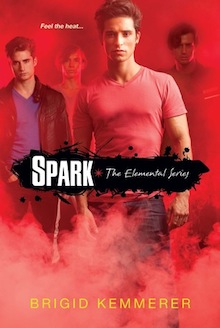 Gabriel has always had his brothers to rely on, especially his twin, Nick. But when an arsonist starts wreaking havoc on their town, all the signs point to Gabriel. Only he’s not doing it.

More than Gabriel’s pride is at stake — this could cost him his family, maybe his life. And no one seems to hear him. Except a shy sophomore named Layne, a brainiac who dresses in turtlenecks and jeans and keeps him totally off balance. Layne understands family problems, and she understands secrets. She has a few of her own.

Gabriel can’t let her guess about his brothers, about his abilities, about the danger that’s right at his heels. But there are some risks he can’t help taking.

The fuse is lit…

*A copy was provided by Kensington for review purposes*
In Storm we met four brothers, one friend, and a girl stuck dealing with them. In Spark, we get into the mind of one of these brothers: the reckless and unpredictable Gabriel. Hot like the fire that he’s learning to control, we delve deeper into this rough-edged character who shows us the depth and insecurities inside his tough shell.

It took only a couple of sentences before I knew I was going to completely adore Gabriel. He was one character that we didn’t get to know a whole lot in Storm, but I immediately felt like I understood him through and through. His character is incredibly complex, filled with grief and self doubt. Besides blaming himself for his parent’s death, he’s very self conscious of his lack of control on his element. I found him to be an extremely well-rounded and likeable character. His flaws make him who he is; a broken, yet kind and loving guy. I was happy to welcome his brothers back into my life, as well. The family dynamic is, again, one of the best traits of this series. They banter and fight, they disagree but ultimately stay loyal to each other. Each and every one of these guys are so particular with memorable personalities that mesh perfectly together. Even though we only get to see Gabriel’s perspective out of all the brothers in this sequel, I still feel like I got to know each of them a bit more. Especially Michael who I’m hoping will get his very own POV in the future as he has quite the fascinating character arc – being the oldest sets him apart some. What we don’t get in this installment is more on Chris and Becca. They are present, of course, but this book enters a completely different chapter where they’re not front players.

A new character comes into play in Spark. Her name is Layne, and she’s a bit… quirky. She’s got secrets of her own to go with her inherent unconventional family. She gets her small share of perspective in this novel, letting us into her life and mind. I was attuned to her right away, curious about her hesitations while she’s trying to figure Gabriel out. Together, they build a relationship that is true and profound. They seem to fit with each other perfectly; they simply make sense. It’s not forced or hasty, it just is. Layne also introduces a whole new family dynamic where Brigid proves again her talent for building strong and true relationships, especially among siblings.

While getting to know Gabriel, we, in turn, get to concentrate on his element – Fire. Therefore, you will see a lot of heat, a lot of destruction, and a whole lot of intense moments. From heartwarming, to gut-wrenching, the emotions flowing from certain scenes in this book really emphasize the art that went into writing it. Not only is it extremely memorable, it shows us how invested we are in not just the main characters, not even just the side characters, but the story “extras” and all. This is how you bring a story to life.

Original, immensely character driven, and absolutely exciting, the Elemental series continues to wow me with the amount of life that shines through it. I strongly urge you to start this series STAT if you haven’t already!

Read my review of Storm here!