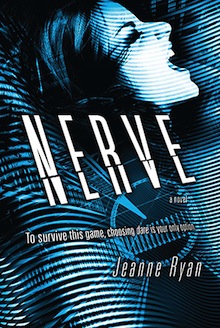 A high-stakes online game of dares turns deadly
When Vee is picked to be a player in NERVE, an anonymous game of dares broadcast live online, she discovers that the game knows her. They tempt her with prizes taken from her ThisIsMe page and team her up with the perfect boy, sizzling-hot Ian. At first it’s exhilarating–Vee and Ian’s fans cheer them on to riskier dares with higher stakes. But the game takes a twisted turn when they’re directed to a secret location with five other players for the Grand Prize round. Suddenly they’re playing all or nothing, with their lives on the line. Just how far will Vee go before she loses NERVE?

*A copy was provided by Penguin Young Readers Group for review purposes*
When the synopsis for Jeanne Ryan’s Nerve was first brought to light, it instantly became a novel I had very high hopes for. Talk of high stakes dares broadcasted online by a game that seems to personally know its players – this screams intensity, excitement, and a heck of a lot of entertainment. While it does deliver on the entertainment front, it leaves a lot to be desired when it comes to its promise of exhilarating suspense.

Does it turn deadly? Sure. But this doesn’t happen until near the end, saving it all for the climax. What was I expecting? More blood, that’s for sure; more danger, more horrifying situations, more serious consequences. Definitely something a lot more sinister than singing in a cafe, or asking people for condoms. When dare after dare ended up being as trivial as the last, I resigned myself to the fact that this simply was not going to be as suspenseful as I had previously imagined. Nonetheless, I can’t say I didn’t secretly take pleasure from the antics the characters were put through. It was entertaining, just not exactly thrilling. Once we get to the finale and things start to get darker, I finally got a glimpse of what I had hoped this whole novel would be: The stakes are sky high, and the level of anxiety rises tremendously. It also brings about a lot of new questions regarding the integrity of this whole game. This “anonymous” organization does have quite an ominous vibe, I just wish it was introduced much sooner.

Like your usual action film, Nerve is highly plot-driven and suffers from a lack in characterization as well as true depth. While I can’t say I particularly cared for our main characters in any strong sense, I can’t even begin to distinguish the numerous supporting roles that all seem to blend together; like a big cast of extras. The absence of character development combined with insta-love also causes the romance to feel a bit stale. Aside from the characters, the plot itself doesn’t have very much substance when you look under the surface either. History of past games would have given the idea more credibility, and how the games are actually constructed without raising very obvious red flags for the parents or better yet, the law, would have helped mend some very questionable logical flaws that arise when you put some thought into it.

There is a hidden message inside this novel that I found quite thought provoking, on how consumerism has such control over us. We easily succumb to material things and the promise of money. I was surprised by the amount of truth there was in the plot. We’re in a culture where consumerism can turn around and destroy us, turning us into unthinking automatons. How far would YOU go to get what you want the most, especially when it’s being dangled right in front of you?

Where this book failed to engage me at first, it made up for a lot of it during the last part. When it all comes to an end we’re left with intriguing hints on where it will go from here; not to mention a gazillion questions regarding the mysterious entity called Nerve. It’s a fun novel, and great if you’re looking for a fast paced read with tons of mystery and action.

Giveaway
As part of the blog tour, Dial Books and Jeanne Ryan have generously offered one copy of Nerve for giveaway
Open to US & Canadian addresses
Giveaway ends September 26th, 2012
Use the Rafflecopter below to enter
a Rafflecopter giveaway
The following two tabs change content below.