Xpresso Reads welcomes the What’s Left of Me Blog Tour on the blog today which is hosted by HarperCollins Children’s Books. I have my review along with a great interview with the fabulous Kat Zhang! 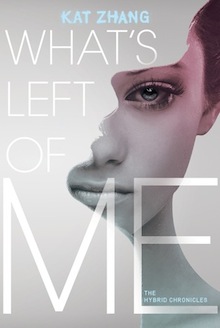 Eva and Addie started out the same way as everyone else—two souls woven together in one body, taking turns controlling their movements as they learned how to walk, how to sing, how to dance. But as they grew, so did the worried whispers. Why aren’t they settling? Why isn’t one of them fading? The doctors ran tests, the neighbors shied away, and their parents begged for more time. Finally Addie was pronounced healthy and Eva was declared gone. Except, she wasn’t…

For the past three years, Eva has clung to the remnants of her life. Only Addie knows she’s still there, trapped inside their body. Then one day, they discover there may be a way for Eva to move again. The risks are unimaginable–hybrids are considered a threat to society, so if they are caught, Addie and Eva will be locked away with the others. And yet…for a chance to smile, to twirl, to speak, Eva will do anything.

*A copy was provided by HarperCollins Canada for review purposes*
Imagine never being alone in your head, always having someone else tag along wherever you go, never ever getting any privacy. Kat Zhang has created this alternate world where humans are born with two souls until one takes over and “settles”. Except, Eva and Addie never did.

Eva and Addie, two completely different personalities are sharing one body – or more like, Eva is stuck in Addie’s head, as Eva has not been able to take control in years. I found this very thought provoking as well as fascinating. For someone who has always been especially curious to know how Siamese twins live, I found myself quite taken by this premise. The simple thought of never being truly by yourself is scary, having to share every single thing with another self. It’s intimidating to say the least. I wish it had gone deeper, however. Since this book takes place in the Americas where souls eventually settle, meaning one leaves, or dies–however you want to look at it–we don’t necessarily observe how those who do keep both souls–hybrids–actually live out their lives. So many scenarios come into play when you question this way of living, I was a little bit let down to see this not explored further. Another world building issue that became a pretty big factor in my not truly loving this novel is how we never really get the motivation behind the whole plot. To realize the dangers of being a hybrid, to feel the intensity this novel tries to evoke, I need to be able to understand why hybrids are treated as a threat and a danger to society. The minute explanation we do get–that hybrids, being constantly on the outs with themselves, can become unstable–is weak and unconvincing of the threat these people make them out to be.

As far as characters go, the ones we meet in this novel are all fairly well developed and enjoyable. I was especially impressed with how different, yet how fitting both of the main characters were. Told in Eva’s POV–the soul hiding in Addie’s body–what we get is a very peculiar narration. Since Eva isn’t in control of their body, she narrates mostly by going over what Addie is doing, referring to things as “ours”: Our hands, our face, we walked, etc. I was sometimes thrown off by it, but it’s a unique way to position a story and also a great method to get us to understand a bit more profoundly what it means to have to share a body with another. This psychological aspect is extremely enticing, leaving us with a sense of curiosity and wonder. As much as I enjoyed Eva’s considerate personality, never blaming Addie for her selfish ways, I found Addie herself to be a little less pleasant. While I understand that it must be extremely hard to live this kind of life, she can come off as very self-centered, because of which I can’t say I particularly liked her.

With a very intriguing start, What’s Left Of Me soon loses its flair around the half way mark when things start to slow down exponentially. Due to the lack of world building I mentioned, I never got a big feeling of restlessness or foreboding from this novel, making their foray into the hospital a little long-winded. Some chain of events felt like a go-around to try to work in some deeper character/psychological aspect into the novel, which is fine, but unfortunately it also caused the plot to become stagnant.

What it comes down to is a novel that has a highly thought-provoking plot with fascinating character relationships and a promising start to a series. With a little more world building, a little more answers behind the hybrids, the severity of it all would have been much more poignant, turning it into a stronger, more compelling novel. It is definitely a series that I will continue as, for the most part, it did keep my attention fully. As well, I’m sure we will get some further examination into what I’m dying to know in the next installments.

Q. How would you describe your book in 10 words?
Two souls, one body–both wanting a chance at life.

Q. Was the book inspired by anything, or did it just come to you?
There wasn’t any specific inspiration for WHAT’S LEFT OF ME. If anything, I’d say it was inspired by watching too many movies with voice-overs standing in for internal monologues! I started wondering, what if that little voice in the back of your head was a whole other person? What would it be like to live trapped in your own body, unable to move, unable to speak with anyone but the other soul controlling your limbs? That was how the idea for Eva began, and the rest of the story grew around her.

Q. I saw that you started writing at 12 years old, which is amazing, was it (albeit a very rough first draft I imagine) What’s Left of Me that you started writing that young? How much has it changed from what you first envisioned?
Thanks! The story I started writing at 12 was very different, about a little girl who ran away from home and ended up at the house of a young doctor and his “troubled” (read: 15-year-old delinquent exasperating his parents) cousin. Her own family is rather broken, but they fight to have her back, and her new “family” fights to keep her. It’s funny, because it’s the kind of story I’d almost be too nervous to tackle today because I’d be afraid of doing it “wrong.” I guess at 12, you don’t really worry about those things.

I started writing WHAT’S LEFT OF ME during my senior year of high school. A lot has changed, especially the ending, but disregarding some initial developments during the first draft or two, the characters and main plot have remained pretty consistent. There are certain scenes that remain almost untouched. Others, though, are re-writes of re-writes of re-writes!

Q. What has been your favorite part of publishing What’s Left of Me??
Definitely the introduction it has allowed me to the publishing/reading/blogging world in general. I love books and stories and reading and writing and publishing so much. It’s wonderful to be around other people who feel the same way! Although, I have to say, I spent entirely too much time on Twitter now…

Q. Who do you picture playing the roles of your characters if it were to become a movie? 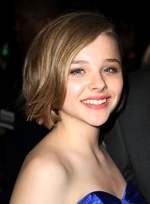 I always have so much difficulty with this question, haha. Right now I’d have to go with Chloe Moretz for Eva/Addie. She’s the right age for it, about the right look (I picture Eva/Addie much less glamorous, but this is movie-land we’re talking about), and I think her range is wonderful. I’d believe her playing two different people in the same body 😉

I have a harder time picking people for Devon/Ryan and Hally/Lissa just because I know about fewer young actors/actresses who are POC, in general, and fewer still who look sort of like how I envision the Mullan siblings to look. I admit I am rather pop-culture dumb in terms of famous people to begin with, though. I’m hoping that once the book is out, someone might be able to suggest a pair who could play them!

Q. What’s your most anticipated book at the moment?
Hmm…. I’m really looking forward to SEVER, book 3 of the Chemical Garden Trilogy. I can’t wait to learn the answers to some of the mysteries that have existed since WITHER! 🙂

Thanks for having me!

Thanks so much for the interview, Kat! I’m glad to have been a part of your tour! 🙂

Kat Zhang is an avid traveler, and after a childhood spent living in one book after another, she now builds stories for other people to visit. An English major at Vanderbilt University, she spends her free time performing spoken-word poetry, raiding local bookstores, and plotting where to travel next. What’s Left of Me is her first novel.

21 Responses to “Review & Interview: What’s Left Of Me”