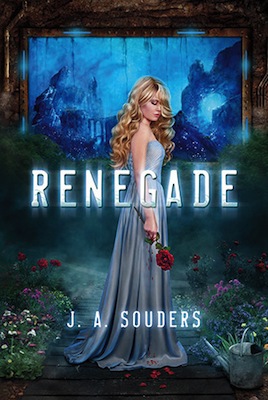 Since the age of three, sixteen-year-old Evelyn Winters has been trained to be Daughter of the People in the underwater utopia known as Elysium. Selected from hundreds of children for her ideal genes, all her life she’s thought that everything was perfect; her world. Her people. The Law.

But when Gavin Hunter, a Surface Dweller, accidentally stumbles into their secluded little world, she’s forced to come to a startling realization: everything she knows is a lie. Her memories have been altered. Her mind and body aren’t under her own control. And the person she knows as Mother is a monster.

Together with Gavin she plans her escape, only to learn that her own mind is a ticking time bomb… and Mother has one last secret that will destroy them all.

*A copy was provided by Macmillan for review purposes*
Holy bloody muffins!!

Look at this pretty cover! Right? Don’t be fooled! The world inside Renegade is not pretty. It’s not beautiful! It’s gory, disturbing, sick, and the more you advance in the story, the more terrifying it all becomes. It starts innocently enough. Perfect life, in a perfect garden, everyone is “perfect” with perfect blue eyes and perfect blond hair, perfect genetics to make perfect babies in this perfect world full of perfect flowers and perfect fish–for real! They live in an underwater dome– you get my gist. It’s a utopia. At least until Evelyn realizes she’s been forgetting things. Her memory is not what it should be, and neither is Mother.

“Failure will not be tolerated. The only result of failure is death
-Enforcer Statute 104A.3″

Mother… That’s what she goes by in this world. She is, of course, the perfect leader. More like, the perfect villain. Like the world itself, the more we learn about Mother, the more perturbed you will feel. This woman has some twisted plans and has been working on sick, gruesome experiments that made my eyes widen in disgust–me: the lover of all things horror. It was not always from the gore either, although there is plenty of it, but also from a psychological perspective. Brainwashing, manipulation, memory alteration, all from an alarmingly young age; there is nothing this woman has not tried. It is all so disturbing in so many ways.

“”Oh my God,” Gavin says, and starts gagging.
Even I can’t blame him. The hallway is covered with dead bodies. The floor is sticky with partially dried pools of blood. The walls and even the ceiling are covered in sprays of blood. And it drips from the ceiling like sprinkles of rain.”

Evelyn is Daughter of The People; mother’s best and brightest. This girl was chosen as Mother’s daughter as she is the epitome of perfect. She will grow up to be the next perfect perfectness. It comes without saying, this girl did not evade Mother’s maniacal engineering. What does this give us? A very broken, messed up protagonist! A girl who is stubborn and resilient, with a mind that has been so altered, that she, herself, is not sure what is true anymore. I found the psychological aspect of this character–this novel as a whole, really– to be incredibly well done. Layer after layer we see the mental instability of not only Evie, but this whole sick “utopia”. Evie shows us her amazing strength and determination, then in the blink of an eye, she turns into someone completely different with seemingly no control over her own thoughts and actions. Now she can’t even trust herself! I love books that add in psychological twists, they both terrify and fascinate me, and Souders did this brilliantly.

Some may consider the romance insta-love. I saw it more as a quick bond founded on this need to survive. Living through horrible life and death situations with another person forms unimaginable bonds, and this is what happens to Evie and Gavin. It’s not the cliché all-empowering-end-all love, but a sweet, believable romance that has quickly, but believably formed between two teenagers running for there lives together, keeping each other alive. And this escape is serious; Imperative. There is a LOT riding on it and will be the difference between a new life, or a life that is worse than death. The pace is set high with constant action, though not so much that it deprives us of character or world building. The horrors that we see along the way makes it even more electrifying; and what’s worse, is it’s all frighteningly real. Even the dome is described in such great scientific detail that it convinces of its plausibility. When we get to the ending, we see ourselves at the start of a new journey that will take part in book two. Oh, the wait will be a killer!

Renegade is the kind of book where the more you read, the better it gets. So for a book that starts already uphill, by the time I was done, I was not only on top of the hill, but I had leaped over, and into an abyss of bloody muffins. Yes, it all comes down to the muffins!

“Way down yonder, down in the meadow,
There’s a poor wee little lamby.
The bees and the butterflies pickin’ at its eyes,
The Poor wee thing cried for her mommy.
-Children song, part of the pre-school curriculum“
*Note that all quotes in this review were taken from an uncorrected proof*
This post is a part of:

Giveaway
As part of the blog tour, you can enter to win some swag and a secret number of Renegade pre-orders!
Open to US addresses only
Giveaway ends November 8th, 2012
Use the Rafflecopter below to enter
a Rafflecopter giveaway
The following two tabs change content below.