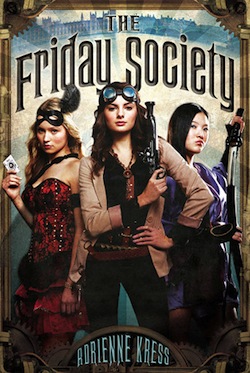 An action-packed tale of gowns, guys, guns –and the heroines who use them all

Set in turn of the century London, The Friday Society follows the stories of three very intelligent and talented young women, all of whom are assistants to powerful men: Cora, lab assistant; Michiko, Japanese fight assistant; and Nellie, magician’s assistant. The three young women’s lives become inexorably intertwined after a chance meeting at a ball that ends with the discovery of a murdered mystery man.

It’s up to these three, in their own charming but bold way, to solve the murder–and the crimes they believe may be connected to it–without calling too much attention to themselves.

Set in the past but with a modern irreverent flare, this Steampunk whodunit introduces three unforgettable and very ladylike–well, relatively ladylike–heroines poised for more dangerous adventures.

*A copy was provided by Penguin Canada for review purposes*
Gowns, guys, and guns, you say? Yes please! Fun is the best word for this novel. It’s a blast from start to finish. We definitely get a lot of guns, and really? Who cares about the rest?

To start with what matters the most: the characters. The three girls we meet in this novel are all spunky, charismatic, and each have their own highly addictive voices. I adored each one and I had a hard time choosing a favorite, but I think I have decided on Cora. Her sarcastic nature really clicked with my own. I liked her intelligence as well and the fact that she’s a scientist (ok an assistant, but she blows stuff up!). I also liked her eccentric fling with Mr. Mysterious, particularly the part where she doesn’t put up with his douche-side. Not far away, we have Michiko–a samurai in training, and Nellie–glamorous magician’s apprentice. Each girl brings about a wide variety of uniqueness to the group with their special skills and talents. Ultimately, Cora, Nellie, and Michiko team up to try to free London of its newest murderer. These three wacky personalities, no matter together or apart, gives us some great antics throughout the story. Their chemistry really flows perfectly, and in the end, the best part of this book is these girls. Hands down!

Steampunk not being my strongest genre, I appreciated the more modern setting of this novel. While it’s set in the 1900’s, I never felt bogged down by old-school dialogue or prose. I loved how it has a steampunk flair with gadgets, corsets, and all the good stuff, but it also maintains a modern feel that works with the character’s personalities so well that it still completely fits the intentioned era of the story.

Fun and unique, the plot is also pretty good, but it does veer on the side of silliness. The girls teaming up is fairly random. They meet by chance, and they decide it would be a good idea to get together and become vigilantes–in costumes of course. That’s about the gist of it. The set up for this teaming is essentially the first 3/4 or the book, with a murder mystery that I found a tad predictable (not on all counts, some things are left a secret but even those aren’t shocking, just a reaction of “Oh. Well ok then.”), and the motivation behind it all a little unconvincing. It kind of reminds me of a classic mystery cartoon episode where you’re entertained thoroughly, but it’s not especially profound, storywise.

With that said, when you’re in the mood for an amusing, enlivening read, this is exactly the kind of book I would recommend to you. It may not have the most complex plot, but it’s got a heck of a lot of charm that you won’t be able to resist!

24 Responses to “Review: The Friday Society by Adrienne Kress”