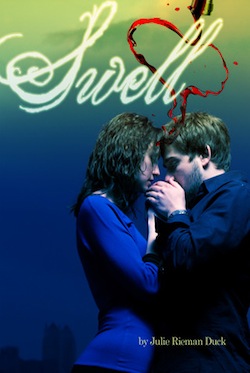 When Christian Rusch plucks Beck Ionesco from the freshman ranks for himself, she’s tempted with parties, popularity, and love. But as the free-flowing booze that soaks his world seeps into her own, Beck begins using liquid courage as a way to ignore Christian’s dark moods… and cover her anxiety about his flirtatious friend Hillman.

However, when Christian breaks up with Beck, and Hillman makes a dangerous move, no amount of alcohol can stop the pain or keep her out of trouble. And just when it seems like she’s lost everything, Beck is partnered with Jesse Leary for an art project. After spending time with him, Beck realizes it’s more than a study date… and Christian’s not happy about it. Then again, Beck’s not sure she’s happy with him, either.

But only after plowing through a bottle of wine, a wild fight, and one guardrail that becomes Christian’s last call, does Beck admit to her problem and ask for help from the one whose life secretly parallels her own.

*A copy was provided by BB Book Promotions for review purposes*
I enjoy contemporaries for many reasons, one of them being the emotional output that you get from them, another is the rawness of their subjects. Swell, both emotional and raw, is a truly great read about teen alcoholism. The topic itself is gritty and unforgiving, and the characters that we meet make us not only sympathize, but understand how something like this happens. And it happens, unfortunately, much more than we might realize.

Don’t think this to be a slow spiral into alcoholism, though. The book begins with Beck being introduced to this new liquid courage, and the story takes place during the heart of her addiction. While some may find it a quick downfall into alcoholism, having seen it happen to friends in high school, I know just how quick this habit can become more than. At first it begins with wanting to fit in, or conform to your peers’ ways of life, then you start having a drink even when you’re alone, which, soon enough, leads to panic and desperation when you run out. The novel also spans quite a few days and weeks in mere chapters which makes it seem like no time has passed, when, in reality, finally finding something that makes you socially accepted, made me understand why the addiction came on strong. Who would want to go back to the way it was?

The blame for this addiction lies mostly on Christian. Christian is good looking and popular, he’s interested in Beck–a freshman–, but he’s also interested in his drink. Being influenced by a cute guy is no uncommon phenomenon. What’s funny in this case is that, even though I recognized his bad influence from the start, and I should have wanted him to piss off, I still liked him. It’s kind of like the author gets her reader influenced alongside her protagonist. I got Beck; I knew why she loved the idea of Chris, and the social privileges that came with, but drinking aside, I never saw Christian as an enigma. He was a jerk at times, sure, but I always felt he had his reasons–his own darkness that influenced him as well.

When it comes between Christian and Jesse, however, there is no contest. A genuinely good and pure hearted soul, Jesse is a breath of fresh air in this novel. A respite from the otherwise agitated tone of the book. Although it is, technically, a love triangle, I wouldn’t even classify it as a “triangle”. In this case, I understood her attraction to both guys. I even saw it more as a confused teenager than any type of triangle. We all experienced teenage hormones, and most know what it is like to be attracted to more than one person. This is not a improbable concept, especially from an emotionally perturbed teenage girl who’s going through way more than anyone should.

Swell is not sugar coated, it’s not pretty or fluffy, it’s a surprisingly profound read dealing with strong emotional events. Because of which I would recommend this for more mature readers. Sex, drugs, and, of course, alcohol, all make grand appearances. If this is the type of raw contemporary you enjoy, I would hand it to you enthusiastically!