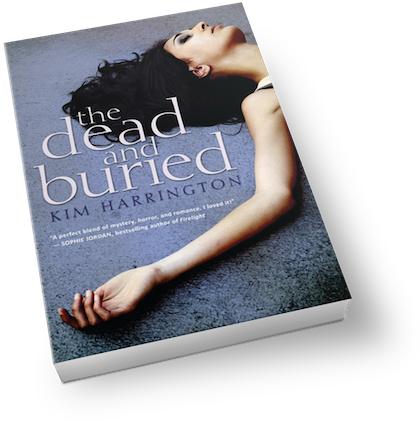 A haunted house, a buried mystery, and a very angry ghost make this one unforgettable thriller.

Jade loves the house she’s just moved into with her family. She doesn’t even mind being the new girl at the high school: It’s a fresh start, and there’s that one guy with the dreamy blue eyes. . . . But then things begin happening. Strange, otherworldly things. Jade’s little brother claims to see a glimmering girl in his room. Jade’s jewelry gets moved around, as if by an invisible hand. Kids at school whisper behind her back like they know something she doesn’t.

Soon, Jade must face an impossible fact: that her perfect house is haunted. Haunted by a ghost who’s seeking not just vengeance, but the truth. The ghost of a girl who ruled Jade’s school — until her untimely death last year. It’s up to Jade to put the pieces together before her own life is at stake. As Jade investigates the mystery, she discovers that her new friends in town have more than a few deep, dark secrets. But is one of them a murderer?

*A copy was provided by Scholastic for review purposes*
Hauntings! In real life I would die of terror if I came upon a ghost, so naturally, I love reading about them to psyche myself out. And if you think mean girls are awful in life, wait until you meet one in death! The Dead and Buried follows such a story when Jade and her family move into a murder house–or at least that’s what the rumor is.

Even though the culprit becomes obvious pretty early on (I guessed around p.60), being curious of their motive does leave some of the mystery elements undamaged. What’s also great are the regular diary entries that shows us just exactly who this mean girl was, and how everything all ties together. The mystery wasn’t my favourite part of the book, however, which is fortunate in this case, having figured it out so early. This book was a regular high school dramatics novel mixed in with a ghost story. I don’t always enjoy reading about high school social circles, mean girls, and boy trouble, but in this case I found it worked very well. The creepy ghost appearances that become more sinister as the book moves along balances it out perfectly, leaving us fully entertained. Thus, the story itself–straightening out the rumor-filled details–is more interesting than the end result in this case.

At least, unlike some cliché mean girl novels, The Dead and Buried gives us believable characters that are eccentric in nature. Besides Jade who, herself, has a quirky side and does not fall prey to the lure of popularity, the most peculiar character is Jade’s very first friend at her new school: Alexa, the school valedictorian and all around oddball. I found this girl highly amusing with her strange behaviors and nerdy references. It’s unfortunate that she takes a backseat for the last half of the book, though; she gave it so much charisma. Stereotype does not completely escape the book, however. The cookie-cutter take on a dysfunctional family being one of them. The dead mother, the stepmother who demands Jade calls her mom (then, of course, thinks Jade is making the ghost story up to get attention), the father who takes Stepmom’s side, denting his bond with his daughter, all concluded by an epiphany that makes them realize they simply hadn’t accepted their mixed families as one. This part felt a little stale to me, forced even. To give more profundity to the story, maybe. Though all I felt was emotional detachment. This also affected how I didn’t get to fully feel the danger in this novel, which does involve her brother. I understood the predicament she was in, but my heart wasn’t in it.

There is quite a bit of romance mingling with the drama and chills: two boys who are both pining for Jade. One of which she’s using, the other she truly likes. I didn’t approve of how she lead one of them on, at all, just to solve a mystery–but again, my lack of emotional connection towards her motivation surely didn’t help her case. I did find the relationship she had with Donovan very sweet, though. Cliché broken boy aside, his personality is attractive. Especially his lack of dramatics. There were a few times where I was expecting jealousy or controlling behavior that, to my delight and surprise, never surfaced.

Ghost who taunts and haunts to get closure may not be the most original story out there–but the journey is still engaging. I would recommend it with a warning that it will probably be a lighter read than you’re bound to expect based on the synopsis or tagline.
This post was a part of:

30 Responses to “Review: The Dead And Buried by Kim Harrington”