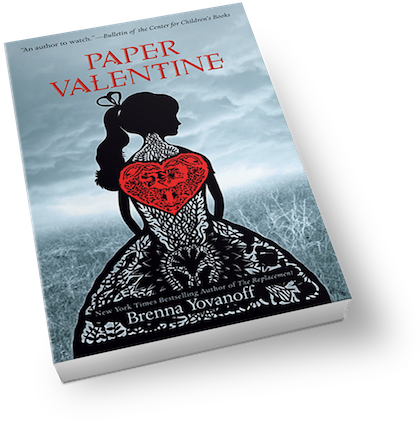 The city of Ludlow is gripped by the hottest July on record. The asphalt is melting, the birds are dying, petty crime is on the rise, and someone in Hannah Wagnor’s peaceful suburban community is killing girls.

For Hannah, the summer is a complicated one. Her best friend Lillian died six months ago, and Hannah just wants her life to go back to normal. But how can things be normal when Lillian’s ghost is haunting her bedroom, pushing her to investigate the mysterious string of murders? Hannah’s just trying to understand why her friend self-destructed, and where she fits now that Lillian isn’t there to save her a place among the social elite. And she must stop thinking about Finny Boone, the big, enigmatic delinquent whose main hobbies seem to include petty larceny and surprising acts of kindness.

With the entire city in a panic, Hannah soon finds herself drawn into a world of ghost girls and horrifying secrets. She realizes that only by confronting the Valentine Killer will she be able move on with her life—and it’s up to her to put together the pieces before he strikes again.

Being my first Yovanoff book, let’s just say that I now consider myself a fan. I was terribly impressed with the writing: Brenna has a wonderful way with words that makes you feel all the creepy. The story which could easily have been a clichéd murder mystery, becomes a work of great atmosphere inside Paper Valentine. There’s murder, romance, ghosts, enlightening characters; this is a good one, folks!

This book has a lot going for it, as stated above, it’s not just a murder mystery, it has substance and emotions. It even has a flair of contemporary when we learn of the way her ghost friend died from anorexia. Which, and for obvious reasons, affected Hannah a great deal as she’s feeling both sorrow and guilt from her loss. We see this darker, depressed side surface regularly in the novel, giving a very realistic portrayal such a death leaves behind. Furthermore, we have a romance that is satisfyingly budding with the boy from the wrong side of the tracks, whom Hannah is drawn to even through her suspicions. Suspicions that put a wedge between them even though they didn’t always know it was there.

Clever with a fantastic creepy flair, the mystery part of the book is great with a fairly unpredictable ending. I say “fairly” because it’s not that it’s impossible to guess, it’s how so many people are made suspects that even if you do figure it out, it’s hard to be convinced your guess is right, and it will most likely change back and forth while the story progresses. I find these types of mysteries the most engaging; being suspicious of everyone, and trusting no one. There are some details of the mystery, as well as the motive, I wish had been given deeper meanings or explanations, though, seeing this is a stand-alone. I was also disappointed about the non-mystery regarding the dead birds. I expected more than “just because of the heat”. I guess this is what I get for not reading the synopsis. Unexplainable bird death is just so awesome! I mean in a creepy way, of course. Not at all because I hate birds. Even if I do. There is just something spine-chilling about flocks of bird found dead. It’s something I have heard in the news a time or two and I always think the world must be coming to an end. Birds will be the death of us, people! I can feel it! They are vile, evil creatures!

Hannah herself is a great protagonist for this type of story. She keeps her head in the game and doesn’t trust people at the drop of a hat. She also has a side to her, a hidden depression, that only her dead friend and the reader gets to glance at. It makes her a very interesting character study, giving it several layers. The same can be said for the love interest which is filled with intrigue as we get his story throughout the book, little by little.

It may be my first, but it won’t be my last novel by Yovanoff. Her style of writing is so unique. Lyrical, yet dark and morbid, it really clicked with me. Even though the ending could have been more fleshed out to give complete closure to the several storylines introduced in this book, it remains a small complaint in the bigger picture where I enjoyed everything else so much. This book does contain a mix of genres, but it was written for readers of dark thrillers; It gets bloody, and it gets eerie. If you see yourself in this description I would hand this one to you in a heartbeat!