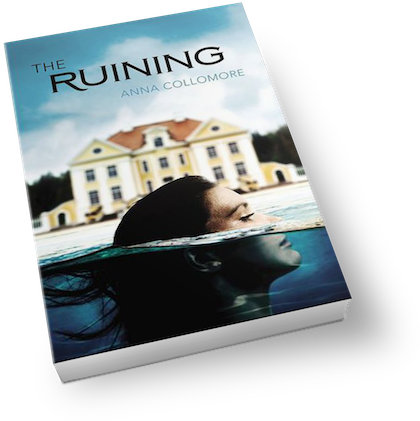 Annie Phillips is thrilled to leave her past behind and begin a shiny new life on Belvedere Island, as a nanny for the picture-perfect Cohen family. In no time at all, she falls in love with the Cohens, especially with Libby, the beautiful young matriarch of the family. Life is better than she ever imagined. She even finds romance with the boy next door.

All too soon cracks appear in Annie’s seemingly perfect world. She’s blamed for mistakes she doesn’t remember making. Her bedroom door comes unhinged, and she feels like she’s always being watched. Libby, who once felt like a big sister, is suddenly cold and unforgiving. As she struggles to keep up with the demands of her new life, Annie’s fear gives way to frightening hallucinations. Is she tumbling into madness, or is something sinister at play?

The Ruining is a complex ride through first love, chilling manipulation, and the terrifying depths of insanity.

*A copy was provided by Penguin Canada for review*

I’ve always found something fascinating about mental illness. As much as I find it fascinating, though, it’s equally terrifying. It renders you helpless to your own mind, and oftentimes medication can not be relied upon. The Ruining is the perfect read for those who also share the same intrigue on our brain’s workings–or malfunctions. Reminiscent of the short story by Charlotte Perkins Gilman, The Yellow Wallpaper (super short and seriously creepy ending), The Ruining is the story of a girl whose sudden nanny opportunity is starting to seem too good to be true.

You’ve probably noticed that I’ve been reading a lot of great mind f*cks lately–I’ve been on a great run!–, it seems like each one I read is better than the last, and you can be sure this one will give you a run for your money! At her new job as a nanny, it all seemed so surreal how lucky Annie was to get this great job. A rich neighborhood, a giant house, even a cute boy next door. However, things have been starting to get weird when Annie’s memory seems to be faulty, and she’s had this… feeling, that something is just not right. It looks like Annie is going mad, and honestly, I felt like I was going insane right along with her. I felt anxious and creeped out both by Libby–the mother–and Annie’s actions. I was made to question absolutely everything that was happening, never quite sure what to believe. Annie’s narrative is especially convincing of her fragile state of mind. I found myself lost in her own confusion so deeply that I started to feel like I was losing my own marbles just by trying to keep it all straight. As far as mind f*cks go, it can hardy get any better than this! This is especially surprising considering the bigger picture of the mystery is not all that hard to figure out, it doesn’t change the threatening, sinister feeling that gets greater as you advance in the story. Anna is a master at building suspense!

This leads me to Annie’s mother. A woman who goes from the sweetest employer to a raving bitch in mere days, as if she was bipolar. I thought it made her such a great character in this type of story as you never know what will cause her next freak-out, or if she gets like that because she’s secretly enjoying mentally torturing Annie. The whole book has this same tone, you never quite know who’s at fault, here. Even the little girl started to give me the creeps with her constant humming of that nursery rhyme.

Annie’s rock and the only sane part of the book, is Owen. She finds a friend, and then more, in the boy next door. I thought the romance was sweet, and Owen incredibly likeable. He’s a truly good guy, and it’s sad to say that these have been rare in YA lately. With all the suspense in the story, I did not dwell on the romance very much, but it’s a great way to balance out the insanity, giving our minds a mental break.

It’s really hard to review this type of book because everything is a spoiler. I want to talk about the ending, I want to praise things about it, and complain (minorly) about others. Aside from its predictability, all I can say is I thought it ended a little “easily”. As if after the mystery was revealed, the author wanted to be done with the story while still having it end all nicely tied up. It’s minor in the larger picture, but I was hoping for something a little more dramatic–even an ambiguous and disturbing ending like The Yellow Wallpaper would have been preferred. Needless to say, this book is fantastic and the ending only bumped it slightly to the 4star side–otherwise, it would have gotten the full 5 stars it greatly deserves for messing with my mind so completely!

30 Responses to “Review: The Ruining by Anna Collomore”