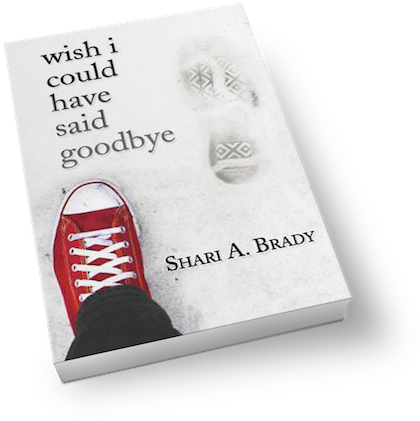 Wish I Could Have
Said Goodbye
Shari A. Brady
Genre: YA Contemporary
Publication date: June 11th 2012

Before my older sister Francesca died, I worked at the bakery and wrote songs, but now I write lists. Lists like ten reasons why it’s my fault Francesca’s dead, or five reasons why I should try and win Howie back, or one reason why I need to stop lying to everyone, including myself.

Wish I Could Have Said Goodbye is an extraordinary novel about one family’s struggle to make sense of their world after losing a family member to addiction. Through sixteen-year-old Carmella’s eyes, we witness the courage and strength it takes to overcome the consequences of grief, guilt and co-dependency. WIth conviction and determination, Carmella shows us what can happen when we’re open to love, feel the pain of our loss, and find the courage to accept the truth of our lives.

*A copy was provided by CBL Book Promotions for review purposes*

Wish I Could Have Said Goodbye was a little bit of a roller coaster ride for me. Some part of the book I really enjoyed, but other parts annoyed me to bits. These would come in spurts, spiking my irritation towards certain aspects, but then it would quickly dissolve and I would enjoy the book once more. Thus, it’s a little hard to straighten out my feelings towards this book, but if you’d ask me if it was good overall, then the answer would be yes.

We’re experiencing the aftermath of a familial death. Carmella (Mello)’s sister and best friend just died of a drug overdose, which has left her family ashamed and confused, as well as broken to pieces. The emotional aspect of the book is present from the start. You feel Mello’s pain and you understand her guilt. It’s hard to move on when something so unexpected hits, something you think you could have fixed if only you would have done something. While I’m not going to say that I connected with Mello on any real level–she never got into my heart like some other protagonists in similar contemporary novels–I was still able to sympathize with her situation quite easily. I understood her reactions that were often driven by her grief; a result of keeping all the pain and blame inside. Luckily, by her side stands Howie, the perfect kind of personality for her situation. She keeps everyone at arms length, separated by her self-blame, but Howie finds a way to get through to her, and instead he becomes her rock. I adored him. He was often lively and charismatic as well, giving this book the upper it had to have.

Mello and Howie are the life of the book, simply put. Mello’s parents, however, from their dismissal to their complete disrespect of Mello’s choices and wants, became a bit of a burden to my enjoyment of  the story. They were not at all fun to hate, either. For instance, at one point, her father got pissed at Mello for having her hair down, not in a ponytail:

“What the hell has gotten into you?” His face looks like old crumpled up newspaper.
“Nothing.”
“Nothing? First you lock yourself in your room and then you show up at a family holiday looking like that?”

She hadn’t rebelled by letting her hair run embarrassingly wild either. There were also some religious aspects and beliefs with which I did not agree, but I won’t get into that here. At last, I was ever so happy to see Mello stand up to them. Finally taking control of her life showed character growth as well as getting my complete respect.

The other negative aspect I have towards this novel is really something of personal taste. I’m sure some do actually really enjoy it, but I really dislike when a book has a lot of lists. Like: “Reasons why I should keep on living”; “Reasons why I hate sports”, followed by a numbered list. They were quite common in this book–almost every beginning of a chapter and then some. After a few I began to simply ignore them, skipping through, as I found it disrupted the flow of the story more than anything it gave to it.

These issues were rather small in the grand scheme of things. I did find I was able to overlook them, and like I said, overall it was a good story. It tackles a very tough topic where a lot of grief and self blame is dealt with. Depression and blame is very common after the death of a friend or family member, and I can only hope that someone in a similar situation finds solace in books like these. If you’re a fan of issue books, Wish I Could Have Said Goodbye juggles loss, guilt, depression, but most importantly, love and acceptance, proving to be an emotional read above all else. 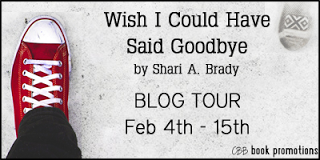 19 Responses to “Review: Wish I Could Have Said Goodbye”