Today I’m kicking off the Things I Can’t Forget blog tour that will run from Feb 26th to March 19th! You will find my review below, and then a pretty fab giveaway that you cannot miss! 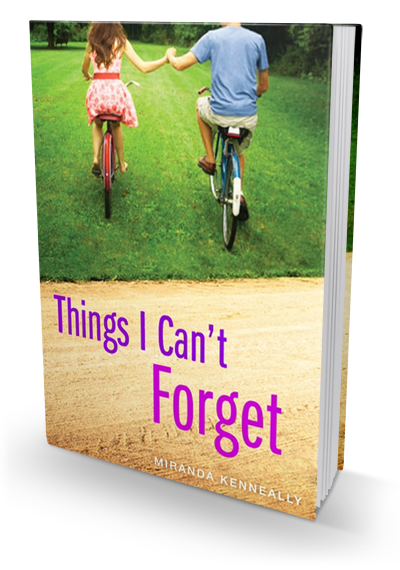 Kate has always been the good girl. Too good, according to some people at school—although they have no idea the guilty secret she carries. But this summer, everything is different…

This summer she’s a counselor at Cumberland Creek summer camp, and she wants to put the past behind her. This summer Matt is back as a counselor too. He’s the first guy she ever kissed, and he’s gone from a geeky songwriter who loved The Hardy Boys to a buff lifeguard who loves to flirt…with her.

Kate used to think the world was black and white, right and wrong. Turns out, life isn’t that easy…

Being a big fan of Miranda’s books since I read and fell in love with Catching Jordan I was only a little weary when I was told this one involved some religion-which I usually quickly turn away from in books. I must say, however, that as usual, Miranda used her magic and turned this into an immensely sweet read, making the religion aspect a simple fact of the story like anything else. Every protagonist has passions and dreams that we get to see as a part of them, this is how religion plays a part in this novel and nothing else. It’s not preached or forced, it’s just a part of Kate’s upbringing. It is what makes her who she is.

As for liking who she is, though, it is not always easy. Kate comes off as a prude and judgmental bitch. She makes it very difficult for others to approach her, let alone understand her. But she does grow a lot throughout the book where she begins to understand her friends a little more–especially her best friend who she’s on the outs with–as well and accept that not everyone shares her views. Even though some times I wanted to slap her senseless, I kind of felt bad for her as well; for her closed up personality, the way she shuts herself off from others, using her faith as a shield. Luckily she discovers new friendship and even love that opens her up a bit. She begins to accept that not everyone sees and believes the same way, and that is still ok!

The first of these friendships and main secondary character is Parker from the previous companion, Stealing Parker. While you don’t need to have read the others to get the full meaning of this novel, it’s great to see our old beloved characters back. Characters that we grew to love, we saw their romance bloom and come to life, are now a super cute couple in this novel. We’re also introduced to a new character and love interest, Matt. Matt is in a frat in college, he respects religion but he doesn’t get buckled down by his faith like Kate, so the relationship is a little rocky for a while. Like usual in Miranda’s books, the chemistry that exists between thees two made my heart soar. They were a perfectly imperfect pair!

Love, friendship, heartbreak, everything a fun summer at camp can bring, Things I Can’t Forget has! Even those who are weary of the religion aspect in the mix shouldn’t worry. We’re made to understand it’s meaning in the book, it becomes part of Kate, like any other character trait. These books are a must read for anyone who calls themselves a fan of contemporary reads!

Companions to Things I Can’t Forget:

Growing up in Tennessee, Miranda Kenneally dreamed of becoming an Atlanta Brave, a country singer (cliché!), or a UN interpreter. Instead she writes, and works for the State Department in Washington, D.C., where George W. Bush once used her shoulder as an armrest. Miranda loves Twitter, Star Trek and her husband.

Giveaway
As part of the blog tour grand prize, Miranda has put together a super awesome bag of her favorite books (and animal butts!) for giveaway to one lucky winner! 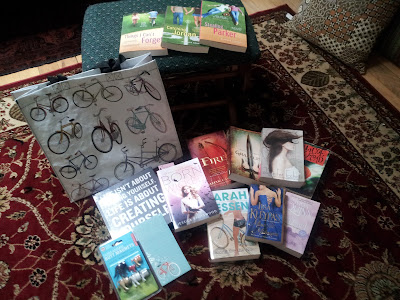 Open internationally
Giveaway ends March 24th, 2013
Use the Rafflecopter below to enter
a Rafflecopter giveaway
The following two tabs change content below.