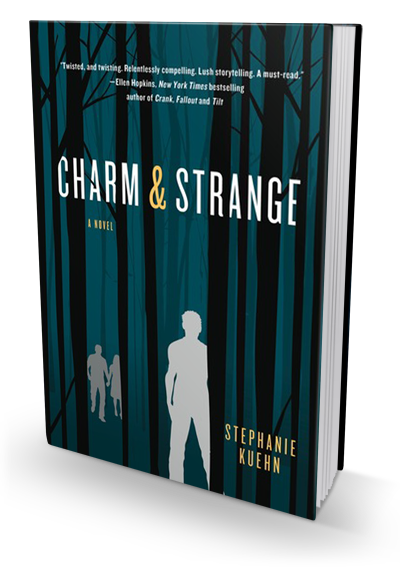 Andrew Winston Winters is at war with himself.

He’s part Win, the lonely teenager exiled to a remote Vermont boarding school in the wake of a family tragedy. The guy who shuts all his classmates out, no matter the cost.

He’s part Drew, the angry young boy with violent impulses that control him. The boy who spent a fateful, long-ago summer with his brother and teenage cousins, only to endure a secret so monstrous it led three children to do the unthinkable.

Over the course of one night, while stuck at a party deep in the New England woods, Andrew battles both the pain of his past and the isolation of his present.

Before the sun rises, he’ll either surrender his sanity to the wild darkness inside his mind or make peace with the most elemental of truths—that choosing to live can mean so much more than not dying.

This book takes mind-fuck to a whole new level–and excuse my french, but there is really no calling this one any different.

Charm and Strange is… well it is very definitely strange. This is probably one of the most baffling books I’ve read. I was unable to stop thinking and questioning and wondering about every single thing that was going on in this book. It felt like it was going to go one route, only to leave me completely bewildered by the direction it did take. While you will likely want to discuss this book the second you turn the last page, once the ending comes, so does clarity. The confusion is not an irritation while reading either, on the contrary, it’s a fascinating and spellbinding confusion that keeps you absolutely unable to think about anything else until you have finally come to understand.

There is a pro and a con side to this novel. The big secret of the plot–what dumbfounded and what made this book truly brilliant in my eyes–will unlikely not stay a secret very long. It’s one of those spoilers that simply can’t be avoided. I can’t even tell you why, but by simply glancing at how this book is described in many reviews in the most general of terms could completely change how you’ll take the story. However this is not necessarily a bad thing. What you expect from this novel, and what you get from it in the end, will decide what you take from it. If you’re expecting a certain type or paranormal tale, or a certain style of storytelling, then you may or may not hate what it actually is. I am probably making absolutely no sense to you right now, eh? If you take only one thing from this review, it’s that you should read this book with ZERO expectations of anything–which is how I experienced it. Do not read the book synopsis, do not check out its Goodreads page, don’t even check what freaking genre it is, just read it. You will thank me! And PS- this review is 100% spoiler free of any kind! 😉

With that said, it’s obvious that this review can’t go into very much plot details, so lets talk characters and writing. Both are exquisite. Our protagonist is one of the most complex character studies I have seen in YA literature. He’s created with such fine threads that you’re truly afraid his instability will crack at any second. We’re taken into his past with alternating past/present chapters where we learn of his upbringing, how he became the broken individual we were introduced to. On one hand, this makes you understand his state of mind, turning any dislike for his bizarre, unlikeable personality into sympathy, but on the other hand it can be a little hard to keep track of two different stories. Yes the two stories are interconnected, and they ultimately merge into one, they still remain fairly separate until then; each having independent characters and settings. I think it was extremely important to disclose the story in this manner so I wouldn’t want it to be any different, just that it did take me a bit to situate myself every time I picked up the book–as if I needed to feel more confused!

As for the writing, it’s unblemished with a prose that is sophisticated yet simple. It doesn’t rush nor does it bore. Its prominent feature is its ambiguity. From the very first page everything is cryptically described, from the past, to the family members, to the relationships, to the wolves, and finally to the present. Nothing is freely given, yet everything is left for us to take, to decipher. While some might think this would be hard to get into it’s the exact opposite. We’re so starved for meaning that it becomes the oil that greases the wheels of this penetrating story.

An exceptionally perplexing novel, Charm and Strange is the type of read where you do not want to move after you’re done. You need time to sit and process what exactly you just got through reading. If you want a book that stands out from the rest, this one has its own playing field!