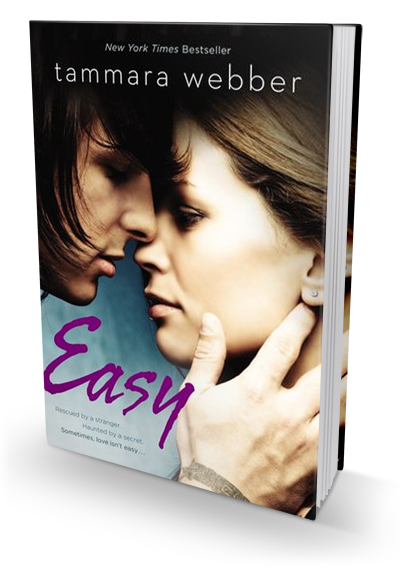 Rescued by a stranger.
Haunted by a secret
Sometimes, love isn’t easy…

He watched her, but never knew her. Until thanks to a chance encounter, he became her savior…

The attraction between them was undeniable. Yet the past he’d worked so hard to overcome, and the future she’d put so much faith in, threatened to tear them apart.

Only together could they fight the pain and guilt, face the truth—and find the unexpected power of love.

A groundbreaking novel in the New Adult genre, Easy faces one girl’s struggle to regain the trust she’s lost, find the inner strength to fight back against an attacker, and accept the peace she finds in the arms of a secretive boy.

An amazing story involving first loves and true loves, Easy by Tammara Webber is highly emotional as it involves the topic of rape and a dark past, but in the end it remains a very heartwarming love story.

In a story like this the characters–their development and likeable qualities–are the most important, and this is where Tammara excels. As much as Jacqueline is created with tons of layers and a personality you can’t help but adore, Lucas’ character, with his tattoos, his Harley, and an extremely kind soul, is not neglected with his development one bit. These two characters become real, breathing, living beings that are effortless in getting us to care for them. Even though the chemistry between them is a character in and of itself, with palpable electricity and obvious attraction, the relationship never felt overly embellished, too perfect, or fairy-tail-ish. The imperfections and obstacles they endure make it less of a fantasy romance, and more a romance that you believe could truly happen. As a side but not a lesser character, Erin–Jaqueline’s roommate and new best friend–lends the book a nice dash of humour, with my favourite being her amusing relationship advice. Her loyalty and support gives the perfect example of what a true friend should be. Throughout the story, the complexities of these characters become even more exposed as we discover layers that weren’t immediately obvious, especially when Lucas’ past comes into play, proving once again that character growth is just as important for a story like this to have its full effect.

The college setting is a great aspect to this novel. Having gone to college in business I found the economic chatter amusing and nostalgic. College days is a time in your life that will always stay with you, and while High School will (unfortunately) never be forgotten, college is where we really find ourselves–at least for a lot of us. This is one of the biggest allures of this New Adult genre for me, and this book portrays it perfectly. It’s a time where, like Jacqueline, you make new friends, you start learning realities of the real world, and you say goodbye to your high school mistakes. Some darker consequences than what most will have to live through is introduced in this story, however, which keeps the tone of this college life on a slightly darker side than the norm, giving the story a bit of an underlying suspense. It provides it with a little oomph, alongside the romance, without it being overly dramatic to the point where it becomes emotional manipulation. Overall it’s a wonderfully told romantic story.

I really have no complaints about this one; I mean, it has your expected “broken character with worst case scenario dark past”, but even so, it was beautiful, sweet, romantic, and fantastically crafted. The only reason I hesitate to give a 5 is because of how it compares emotionally to my last 5 star NA read (Hopeless) which was a lot more affecting for me–that one truly gutted me until I was bruised. Easy is more a love story with some dark tones, while Hopeless is more dark tones with a love story. And yes I’m comparing the two because I’m thinking that, for some, whichever of these you will read first might possibly trump the other.