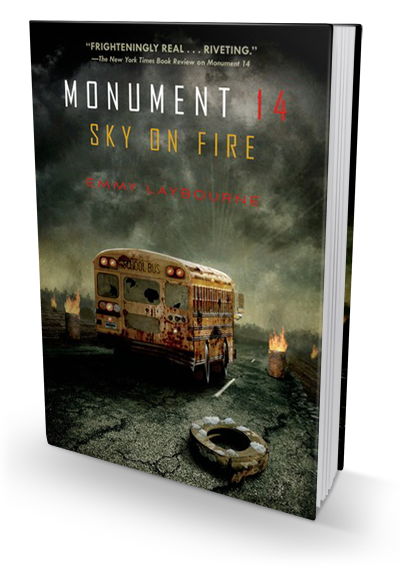 In this sequel to MONUMENT 14, the group of survivors, originally trapped together in a superstore by a series of escalating disasters, has split in two. Most of the kids are making a desperate run on their recently repaired school bus for the Denver airport where they hope to reunite with their parents, be evacuated to safety, and save their dying friend.

But the world outside is dark and filled with dangerous chemicals that turn people into bloodthirsty monsters, and not all the kids were willing to get on the bus. Left behind in a sanctuary that has already been disturbed once, the remaining kids try to rebuild the community they lost. But when the issues are life and death, love and hate, who can you really trust?

Sky on Fire, the sequel to Monument 14, is more action packed and exciting, but the writing is still filled with irritating quirks that doesn’t allow me to give it a higher rating, no matter how much I might have enjoyed the rest–which was actually quite a bit.

Since we’re at it, let me tell you what I mean about the writing. I knew from the first book that the author likes to write as if her readers are a little… slow? The first novel was filled with commentaries and unnecessary repetitions to make sure we understood clearly what was happening. This sequel is, unfortunately, not without these redundancies. The best example:

“Right before Castle Rock, there was a long stretch of open highway. (“Open” meaning that there was one clear lane with no obstacles to go around.)”
–Thanks for that, Captain Obvious!

This is an example from book 1:

Niko half dragged me through the hail, down the “aisle” that was not an aisle but was actually the space above the seats (because, remember, the bus was on its side).”
–Ooooh ok, I hadn’t caught that when the bus CRASHED and flipped sideways 30 seconds earlier.

Fortunately. these instances only appear a couple of times in each book. However this is not my only complaint on the writing. While reading, there are sentences and… peculiarities that stand out like a sore thumb, which both distracted and annoyed me. Here are some of them and maybe you’ll see what I mean:

“They had dirty faces and smelled not good.”
–You speak good.

“what I read in her expression went something like: Ah, this dumb kid feels like he’s getting pushed around so he’s taking a stand on a small, insignificant detail. But I guess if he needs to win this little victory for the sake of his pride, then I will give in.”
–That’s very facially talented! O_O

“Jean let me rub some toothpaste around on my gums so I wouldn’t have breath like I ate a donkey’s butt all day.”
–Gross! Worst analogy ever!

Also, the most dangerous side effect of this chemical: “O monsters”! Yep. *snort*

Aside from this writing, I actually quite enjoyed the rest. With many characters, I was impressed that I was able to easily keep them all straight, and they became people I cared about–though some more than others. I also appreciated the neat way the recap was done with an ” in case we die” letter at the beginning. It was only 3 pages, but it completely set me right back to where we had left off as if no time had passed.

This time, the plot was a lot more exciting while still keeping the claustrophobic feel some loved from the first. This is achieved with two POVs: one from the supermarket, another from the outside, which raises the tension in the story, plus it answers the big question of what the outside has been like since this apocalypse. On this note, I found it to be a pretty realistic depiction of how people would act during such a catastrophe: violence and horror caused by other survivors are often the most dangerous of all. Although we still did not get answers as to what brought on the deadly chemicals, we do make some progress with which I was satisfied, knowing the explanations were (hopefully) saved for the final installment. Furthermore, since the outside POV constantly keeps us on edge, I actually enjoyed the more laid-back feel of the others in the supermarket this time, “playing house” as I called it in my review of book 1. It doesn’t stay quiet for long there either, however. Overall, it does become a pretty exciting novel and by the ending I was frantically turning the pages with my heart pounding. It’s really a shame that the writing puts such a damper on things.

The writing problems I had are not something new to this sequel, so if you loved the first you might not be bothered by it in Sky on Fire either. I did think it was a strong sequel which is rare in itself, and despite my complaints, I’m looking forward to the 3rd – Savage Drift!

27 Responses to “Review: Sky on Fire by Emmy Laybourne”