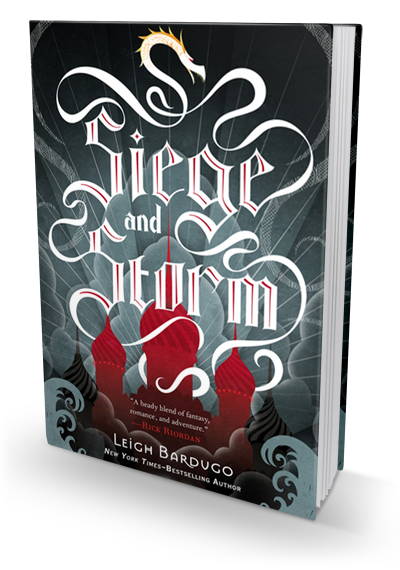 Hunted across the True Sea, haunted by the lives she took on the Fold, Alina must try to make a life with Mal in an unfamiliar land. She finds starting new is not easy while keeping her identity as the Sun Summoner a secret. She can’t outrun her past or her destiny for long.

The Darkling has emerged from the Shadow Fold with a terrifying new power and a dangerous plan that will test the very boundaries of the natural world. With the help of a notorious privateer, Alina returns to the country she abandoned, determined to fight the forces gathering against Ravka. But as her power grows, Alina slips deeper into the Darkling’s game of forbidden magic, and farther away from Mal. Somehow, she will have to choose between her country, her power, and the love she always thought would guide her–or risk losing everything to the oncoming storm.

Siege and Storm continues the enchanting story of Alina, Mal, and the Darkling, in their world full of danger and secrets. Starting with a bang, we’re reacquainted with Alina and Mal trapped in a less than stellar situation on the Darkling’s ship. This is sure to immediately captivate any fan of the series, pulling us again in this magic-filled story of the Sun Summoner. It didn’t take long until the characters carved their way into my heart again. I wasn’t as impressed with this sequel as I was with Shadow and Bone, but the characters are still as charming as ever, and the world building is simply fantastic.

In an action packed beginning, we meet a new mysterious character that becomes quite a big part of this sequel. However, I was saddened by how he seemed to replaces the Darkling. He’s not an enigma like the Darkling – even though he does give off that vibe quite a bit – nor is he even close to being as charismatic, so sadly it did not compensate for the Darkling being MIA for 90% of this novel. While the latter does make sporadic mysterious appearances, the absence of this mysterious villain was my biggest letdown during this book. His personality and the atmosphere he infused in Shadow and Bone had me equally frustrated and mesmerized, so I felt like I was left with a void. A void I’m thinking this new character was supposed to fill but unfortunately did not quite get there for me. The fact that Mal never made any real connection with me surely did not help either as he is also a large part of this book. I do like his character, but he doesn’t exactly do anything for me emotionally or romantically. Nonetheless, as far as characters go, we do get a slew of fantastic secondary characters who don’t miss the mark in this sequel. They give the book a lot of personality. There is a large number to keep track of, though; it can take a bit of mental effort to keep  everyone straight, especially if it’s been a while since reading the first book.

After this action packed beginning at sea, we revisit this monster-filled world full of war and magic. I loved learning more of the world, especially more about Alina’s powers and what she is trying to become. I was hoping for more actual plot progress, however. The placing slows to a crawl mid-book, switching to a relationship and character heavy novel. It’s great to see Alina come into herself, figuring out who she is, who she needs to be, but I would be lying if I said this was very exciting. As much as I love character development, I found myself restless with the lack of action. High fantasy is a genre that is a bit out of my comfort zone, though – I was even surprised by how much I loved the first book – so I’m convinced that those with a passion for fantasy won’t mind this at all.

It begins with a bang, and it ends with one as well. The ending finally brings us back the Darkling (yehaw!) for an exciting and action filled climax. I loved how bold it was, as well as how serious it quickly became. Death and emotion are not missing from it, neither is the promise of an exciting conclusion in the third book. As I said, this genre is a hard sell for me, the first novel’s action packed plot reeled me in; the loss of magic in this sequel is due to a personal taste rather than a reflection on the book itself. Leigh is an incredible writer and I have no doubt she will catch the hearts of all fantasy lovers yet again!

31 Responses to “Review: Siege and Storm by Leigh Bardugo”