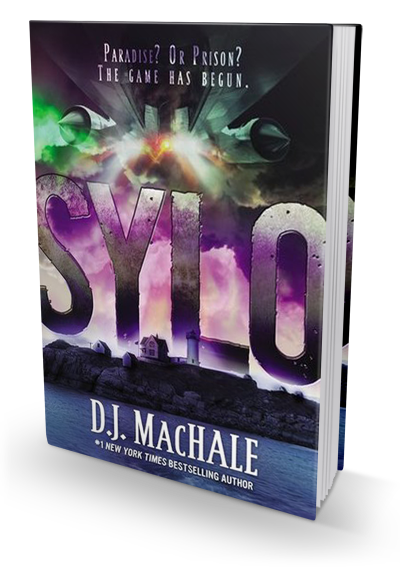 Does Tucker Pierce have what it takes to be a hero when the U.S. military quarantines his island?

Fourteen-year-old Tucker Pierce prefers to fly under the radar. He’s used to navigating around summer tourists in his hometown on idyllic Pemberwick Island, Maine. He’s content to sit on the sidelines as a backup player on the high school football team. And though his best friend Quinn tells him to “go for it,” he’s too chicken to ask Tori Sleeper on a date. There’s always tomorrow, he figures. Then Pemberwick Island is invaded by a mysterious branch of the U.S. military called SYLO. And sitting on the sidelines is no longer an option for Tucker, because tomorrow may never come.

It’s up to Tucker, Quinn, and Tori to uncover the truth about the singing aircraft that appears only at night—and the stranger named Feit who’s pushing a red crystal he calls the Ruby that brings unique powers to all who take it. Tucker and his friends must rescue not just Pemberwick Island, but the fate of the world—and all before tomorrow is too late.

Almost a 4 star, SYLO starts off as your run of the mill YA sci-fi mystery but it ends up being much more complex than expected. I did really enjoy it, but I found that 1) we didn’t get enough answers even for a first book in a series and 2) it could have done with 50 or so less pages – which is likely linked to 1).

A strong aspect of this novel is how the beginning chapters really pull you into the story. Being engaged from the start is a wanted feat that is not often achieved. MacHale does this by getting right into the sudden deaths happening on Tucker’s island. He then keeps it up by introducing small chapter cliffhangers every so often throughout the book, which I’m personally a sucker for. Barring that, however, I wasn’t a huge fan of the writing style. Some of it simply felt off for supposedly being the voice of a 14 year old. And some of it felt cliché; for instance, the frequent use of “suspenseful” sentences like:

“”Thirty yards!” Kent called out.
…as the machine gun behind us opened fire.
We were about to cross the stern of the flaming destroyer when…
“Now!” Tori called.”

“I eased the wheel to port, made the gentle turn and…
…my moment of peace instantly vanished.”

I know this critique is more of a personal preference but there were a lot of these suspension points throughout that I found cheesy. Another small quirk is how, during normal conversations, a character was said to “scream” or “shout”. Either the author was hoping for a heightened tone effect, or these islanders are really freaking intense (and loud)!

“I think we’re making a big mistake.” Quinn said.
“Seriously?” I shouted. “Now you’re having second thoughts?”
-Sounds like a shouting match, don’t it? (It’s not.)

Our male protagonist, Tucker, is your average teenager who likes his simple island living, so when it gets quarantined and people start dying, he gets a little restless. Tucker is an average character; he’s not someone who’s especially memorable long term, but I didn’t dislike him. Same goes for the secondary characters. While most were charismatic, I didn’t get emotionally attached to them – which is proven by my lack of reaction when one of them dies. I did grow the most connected to Tori, one of the main secondary characters. I loved that she’s a tough girl who’s able to fend for herself; her intelligence, strength, and bravery shine through.

The plot itself is what’s truly entertaining in SYLO, and does make up for the aforementioned qualms, some. There is a ton of mystery from the get go, the sudden deaths being the first of many. There are unexplained aircraft hovering about – one of which explodes right in from of Tucker, never to appear in the news. Bizarre drugs that turn people into temporary supermen. Then there’s how insanely far the military is going to make sure no one leaves escapes. With an abundance of secrets on this island, it’s unfortunate that we become privy to very few answers by the end, though. I wish we’d gotten further into the bottom of it all; we barely scratched the surface. For that reason, I think the book could have been shortened 50 pages or so to stop the non-answers from dragging at times – it was not excessively so, but it did feel lengthy. At least the ending does show us how deep this bottom goes, and I really liked where the author went with it.

SYLO is what I would consider a boy book; a male protagonist, a lot of football talk, missiles, explosions, plenty of death, fighter planes, warships, and a kick-ass climactic battle at sea. Everything a boy-book loving girl like myself could ask for!