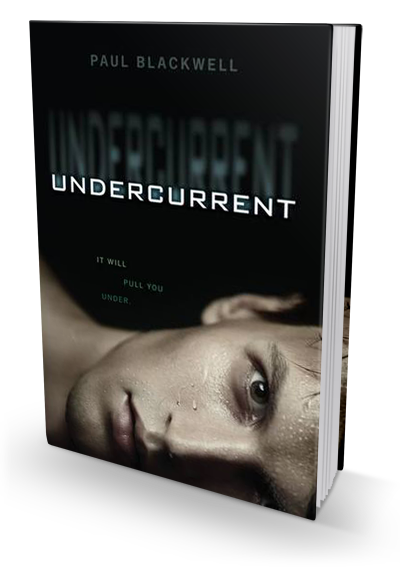 In Undercurrent, Paul Blackwell’s fast-paced YA thriller, sixteen-year-old Callum Harris survives a plummet over a waterfall, but wakes to find himself in a life that’s totally different from the one he knew.

His parents were separated. Now they’re together. His brother Cole was a sports star. Now he’s paralyzed. And Callum, who used to be quiet and sort of unpopular, is suddenly a jock with two hot girls after him.

But there’s one difference that matters more than all the others combined: His former best friend wants Callum dead. And he isn’t the only one.

When I heard someone say this was reminiscent of The Butterfly Effect, which is one of my favorite movies ever, I jumped on the chance to read this book. It does have that neat butterfly effect factor, but I did find the book itself had no real… point. It’s for entertainment only! When I finished the book I was stunned at where it left off, especially when no sign of a sequel can be found. It wasn’t a cliffhanger per se, but it was a very odd ending that didn’t feel like much of a conclusion.

Alas, I’m getting ahead of myself. And probably giving the impression that I disliked the book which is not the case. Undercurrent is honestly a fun, entertaining book that never let my attention falter. The whole alternate life deal had me fascinated from the start. You’re always left wondering, questioning, pondering. Imagine waking up from an accident and your whole life has changed! Your friends are your enemies, your enemies are your friends, the friendly person you were is now known as a bully. I was captivated by this premise. I loved seeing Callum’s reaction to all the changes; he was fighting hard to mend the wrongs while refusing to believe his memory of everything was false. It was both sad and exciting to see him try to figure it all out. Some things were changed for what people would consider “the better” seeing as he was now a popular jock with everyone hanging at his every word (or threat), but a lot of other things, the things that matter, were definitely not better. The girl he loves doesn’t know him, his brother is paralyzed, and people hate him for the trouble maker he is. There is a reason why I love psychological thrillers and while this is more of a sci-fi thriller, you do find yourself wondering what if. What if you had made a different decision that one time? How much would be different if you hadn’t…? These are just things I personally get so curious and intrigued about, so I had a fun time with this book.

With such a neat premise, though, I wish it would have been more intricate in a lot of ways. The main character, even though he was well developed enough, was a little slow to figure things out at times. I had guessed almost right away who the guy in the Crocodile’s jacket was. I was also hoping for much more progress as far as the plot itself. The whole book consists of Callum figuring out why everything is so different. We don’t learn much about the actual “science” or world building behind it – what’s so special about the Crystal Falls to make it tear realities? How do others (like the teacher) know about the alternate existence? I mean, we all kind of wonder but we don’t see people jump off cliffs to test the theory off of hope. And what did he throw off of that waterfall with a light? A machine to send a message to another reality, yeah, but what is it? O_o Why was Cal brought to this particular reality (and there was only mention of that 1 other reality)? If you’re going to introduce alternate realities based on the butterfly effect then there has to be countless realities for every single decision made in a life, no? Then when all is said and done we never do learn any details on what happened in Cal’s old reality, nor what’s going to happen to him and his other self, now? And why was the whole bit about Neil even included? SO MANY QUESTIONS!! Basically, this plot was done for those who like the idea but don’t want to really think about it much. I’m not one of those readers.

Undercurrent offers an intriguing but simple view into the world of alternate realities. It’s always fun to see how different things would be with only one changed decision. I wish the book would have been more fleshed out, but it was an entertaining read, nonetheless.

Edit: The author did tell me there was a sequel in the works that’s waiting on the green light. So that does help lessen some of my dissatisfaction regarding the unanswered questions. Yay!