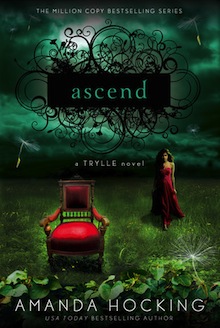 Wendy Everly is facing an impossible choice. The only way to save the Trylle from their deadliest enemy is by sacrificing herself.  If she doesn’t surrender to the Vittra, her people will be thrust into a brutal war against an unbeatable foe.  But how can Wendy leave all her friends behind…even if it’s the only way to save them?

The stakes have never been higher, because her kingdom isn’t the only thing she stands to lose. After falling for both Finn and Loki, she’s about to make the ultimate choice…who to love forever. One guy has finally proven to be the love of her life—and now all their lives might be coming to an end.

Everything has been leading to this moment.  The future of her entire world rests in her hands—if she’s ready to fight for it.

*A copy was provided by St. Martin’s Press for review purposes*
This is it. The queen is dying. The king wants her kingdom. He will do anything to get it. Only Wendy stands in the way.

The final book in the Trylle Trilogy has great character development and an excellent romance. I was, however, a bit underwhelmed by the ending. We’ll get to that. First, the characters. Wendy can be a bit dramatic. She will jump to decisions in a heartbeat and that kind of annoyed me at first. It’s like she doesn’t stop to think before she acts. I guess I should be used to her by now but it irritated me more in this one. I think she may have been a bit too confident by her almost-queen status. But since she is almost the queen, she shouldn’t make rash decisions. She seemed to do as she pleased without listening to advice thrown at her. So I did get a bit frustrated with her decisions. However, she still has her awesome sense of humor that had me giggling a few times. Next to her, we have the whole gang of side characters that I grew to admire from the first book. I loved Tove especially in this one, but we didn’t delve much deeper into any of them except for Loki.

Loki is the character I was the most fond of. He is an absolutely great addition to the series. Mysterious and sincere – he’s a really strong character with a lot of heart. The romance he shares with Wendy is intense and honest. It’s not only Loki that’s been grasping at Wendy’s heart, though. Finn has never left it, but she’s trying to move on. I actually quite enjoyed the way the love triangle played out in this series. It didn’t turn out the way I thought it would, and that was a pleasant surprise. It made it much less cliché with real emotional consequences.

This series as a whole is not incredibly action packed. It’s more about the characters and the ominous upcoming battle. This battle that finally arrives, to me, was a bit underwhelming. Having waited 2 previous books for this epic showdown, then getting it over with without much effort, not to mention a bit too perfectly, felt anticlimactic. It’s very much the happily ever after ending. It wasn’t bad, but I expected more emotion, more negative repercussions I guess; giving it more weight to make it memorable. Maybe I’m just a masochist. *shrugs* Regardless, I wouldn’t say I was disappointed with the ending, I just wasn’t wowed by it.

This whole series is definitely fun. I loved learning about the complex world of Trylle and Vittra. It’s highly original. I also had a great time getting to know the numerous characters inside it. It reads a lot like a mild fantasy novel that I’d recommend for paranormal fans who are looking for something different and creative.