I know a lot of you are absolutely loving this series alongside me so I’m happy to have the Onyx make a stop at Xpresso Reads. I have my  review for you today, as well as a fantastic guest post about sex in YA by Jennifer L. Armentrout, and there’s a giveaway! 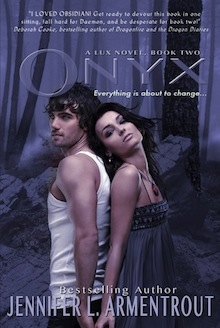 Being connected to Daemon Black sucks…

Thanks to his alien mojo, Daemon’s determined to prove what he feels for me is more than a product of our bizarro connection. So I’ve sworn him off, even though he’s running more hot than cold these days. But we’ve got bigger problems.

Something worse than the Arum has come to town…

The Department of Defense are here. If they ever find out what Daemon can do and that we’re linked, I’m a goner. So is he. And there’s this new boy in school who’s got a secret of his own. He knows what’s happened to me and he can help, but to do so, I have to lie to Daemon and stay away from him. Like that’s possible. Against all common sense, I’m falling for Daemon. Hard.

But then everything changes…

I’ve seen someone who shouldn’t be alive. And I have to tell Daemon, even though I know he’s never going to stop searching until he gets the truth. What happened to his brother? Who betrayed him? And what does the DOD want from them—from me?

No one is who they seem. And not everyone will survive the lies…

Ah! The long awaited sequel to Obsidian! Hot and spicy, Jennifer L. Armentrout’s Lux series is up on top with having one of the strongest chemistry between characters, the hottest lust filled scenes, and the most infuriating beautiful being in YA.

This sequel’s strongest aspect, like its predecessor, is its deeply rooted characters. We have Katy–book blogger extraordinaire–who is a really fun, snippy protagonist, then we have Daemon who is… well he’s a jerk face, and I say this with a smile on my face. His punch-worthy behavior can be quite amusing–though I’m sure Katy would disagree–but I was pleased to see how far his character grew in this installment. We meet the personality behind his sarcasm; letting us glimpse at who he is at his core, his emotions and his fears. In between his slap-worthy demeaner and chuckling remarks, I began to see him as not just a source of entertainment (that I would quite strongly despise in real life), but as someone who is respectable and thoughtful. On the other hand, Katy, who I clicked with immediately in Obsidian, made me feel exasperated by her completely relentless skepticism towards Daemon and their feelings for each other. I understood her hesitation and fears, but her excuses ran a little longer than I would have liked. I still enjoyed her as a character as she’s easily likeable and relatable, yet I couldn’t help but hope for further character development on her part. We also meet a new male character in this novel who I was afraid, at first, would amount to an unwanted love triangle; fortunately, it was handled fairly well, giving the romance some extra oomph without turning into a cliché or simply antagonizing its readers. Plus, Daemon has an infinite stash of increasingly hilarious nicknames for this new fella that became the highlight of my reading experience. For every new nickname Daemon comes up with, an angel gets its wings!

The plot, although somewhat predictable in this particular novel, is starting to get a bit deeper as far as the consequential complexities of the Aliens coming to earth. I won’t say this sequel brings forth immense plot progressions, but we do learn some very interesting details about the people surrounding Katy and Daemon, while showing us a glance at the bigger picture of this vast conspiracy. The bigger part of the book is spent building up the complex and often complicated relationship between our two main characters. The chemistry has not left them; they have sparks like no other, but now emotions are involved. I was greatly satisfied by the direction their story took, it’s realistic and completely swoon-worthy. I did feel the book became long winded towards the end, however. The ending, itself, though not a true cliffhanger, raises a lot of questions about the upcoming novel and what will undoubtedly be some crazy interesting developments.

A completely addicting and non-stop flirty read – Onyx is an enthralling sequel that is a fine addition to the Lux series. For those who haven’t jumped on the Obsidian boat yet, you’re missing some very sexy reading!

The Lux series so far:

Read my review of Obsidian here!

A few months ago, one of the YA sites had asked a question on Twitter. “Who do you think writes sexy YA?” I was unaware of this question until I started getting a lot of tweets with my name and the hashtag. I started to laugh… until it was like the twentieth tweet and I realized writing sexy YA is probably what I’m most known for.

Does that bother me?

Absolutely not.  Sex isn’t a four letter word. Sometimes it seems more acceptable to have books with teenager characters killing one another than having a sexy scene where the characters don’t even have sex. That alone blows my mind. Sex is somehow more evil than murder. So is profanity and I’m not even talking about the “F” word. I’ve seen more people get upset over the word “thrust” in a YA book than people get up in arms over two kids fighting to the death.

I do write the sexy in YA books, but I always keep it appropriate. The thing is that what is appropriate is totally subjective to whoever is reading the book. I’ve actually had readers tell me that they wished certain scenes would’ve gone further or had more details while other readers have felt that it was a little bit too much. I can’t say what the appropriate amount of ‘sexy’ in YA is. That’s up to the author and reader. I can tell you what I think is appropriate and why I write it.

What I write: I only write upper YA. For those wondering what the really means, upper YA is when your characters are between the ages of 17 and 18, most likely about to graduate from high school. Upper YA also tends to have more adult undertones. If I was writing about 15 year olds, I wouldn’t be putting those characters in the situations mine are in and I’m just not talking about the sexy scenes. With upper YA you can be riskier and push the limit.  (Please note: that is just my opinion. Another author or publisher may feel a different way.)

My reading habits: I also look back to what I was reading when I was a teenager. I grew up on historical romances. I started reading them around twelve or thirteen (and we all know the amount of heat those books have) and being exposed to sexual content didn’t turn me into a nymphomaniac. Or anyone else I knew that read those books as a teenager.  The only down side of reading those books was I had some way high expectations of sex. Like impossibly high expectations.

Teenagers know what’s going down: Once again, this is just my opinion. And this is the one that will probably get me in the most trouble. Treating a teenager like they have no idea what sex is, is just ridiculous. Most teenagers know more about sex than I do. That doesn’t mean they should be out there doing it, but some are. Some aren’t.  They kiss. They touch. They experiment. They can do a lot without actually doing, you know, the deed. Putting fictional teenagers in a bubble where no one in their world is doing any of those things is very unrealistic. As a teenager, I would’ve had a hard time relating to those characters, so I try to make my characters as realistic as I believe them to be, based on my own expectations and experiences.

Teenagers experience emotions too, you know: Teenagers experience love, hate, grief, loss, pleasure, heart break, lust, and a whole range of human emotions. They don’t start experiencing these things only when they turn 21. Not delving into those emotions would feel like I’m cheating my characters, the story, and the reader.

What I think is appropriate: It’s all in the details. There is a way to write scenes without going too far, because you can go too far. An erotica YA would be going too far and honestly would disturb even me.

When I write the ‘sexy’ scenes in YA, I always take my time and make sure I’m not crossing any lines that I would be uncomfortable with. And the thing is, the less detail you give, the more chemistry your characters end up having. So for me, it’s a win/win. I write the way I do, because I feel like that’s acceptable. Not everyone will. That’s the great thing about reading and writing books. It’s all subjective. 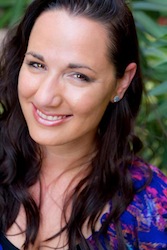 Jennifer lives in Martinsburg, West Virginia. All the rumors you’ve heard about her state aren’t true. When she’s not hard at work writing, she spends her time reading, working out, watching really bad zombie movies, pretending to write, and hanging out with her husband and her Jack Russell, Loki.  Her dreams of becoming an author started in algebra class, where she spent most of her time writing short stories….which explains her dismal grades in math. Jennifer writes young adult paranormal, science fiction, fantasy, and contemporary romance. She also writes adult romance under the name J. Lynn.

Giveaway
Entangled Publishing has generously offered one print copy of both Obsidian and Onyx for giveaway to one winner.
Open to US addresses only
Giveaway ends August 26th, 2012
Use the Rafflecopter below to enter
a Rafflecopter giveaway
This post was a part of the Onyx Blog Tour: