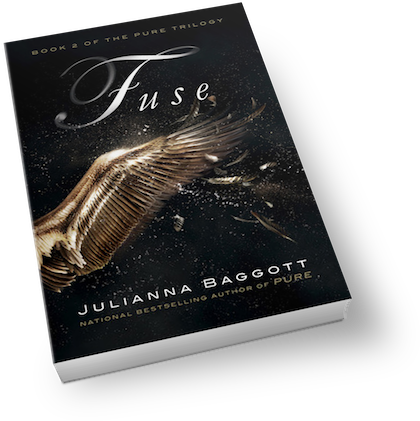 When the world ended, those who dwelled within the Dome were safe. Inside their glass world the Pures live on unscarred, while those outside—the Wretches—struggle to survive amidst the smoke and ash.

Believing his mother was living among the Wretches, Partridge escaped from the Dome to find her. Determined to regain control over his son, Willux, the leader of the Pures, unleashes a violent new attack on the Wretches. It’s up to Pressia Belze, a young woman with her own mysterious past, to decode a set of cryptic clues from the past to set the Wretches free.

An epic quest that sweeps readers into a world of beautiful brutality, Fuse continues the story of two people fighting to save their futures—and change the fate of the world.

*A copy was provided by Hachette Book Group for review*
Just as disturbing and highly addicting, Fuse is an excellent sequel to Julianna’s compelling dystopian series. If you’re known to love unpleasant, often disturbing post-apocalyptic settings, this series is one you should be reading. The world in Pure may just be one of the most freakish worlds I have ever encountered. It’s horrifying, yet I can’t help but feel a slight thrill the more I read about it. Descriptions of how humans are fused with objects, other humans, or the earth itself is, without a doubt, one of the weirdest dystopian imaginings, but you know what? It works so amazingly well. It gives us a world that is unbelievable cruel, a world that breeds fear for its inhabitants like no other. Besides, considering what caused the apocalypse, I would not tell you that this is unrealistic; its setting is completely believable for what they live in, laden with death, anomalies, and frightening creations that are not paranormal, but stem of an apocalypse caused by science. What I also love is that it isn’t so far off in the future. These survivors remember what it was like in the “Before”, they lived through the end of the world as we know it before they were plunged into unimaginable horror. That, my friends, is how you go about building a fictional world!

As we have already been introduced to the world and characters in Pure, Fuse, like most sequels, brings us deeper into the thick of things. We get even more world building which comes by primarily from our visiting more of the world itself. Thus, we not only get further details that expand our knowledge of its monstrosities, we also see new territories that convey even more intriguing post-apocalyptic weirdness/happenings. Furthermore, regardless of the novel’s length, I found the plot to be moving at the perfect pace, making great progress along the way–especially considering it’s a middle book. We get more relationship development, more experimental science, more conspiracies, more mysteries revealed, and after you have read all of this delightfulness, you will appreciate its gorgeous cover a million times more–it ties in so perfectly with the book.

Multiple POVs is what we get again in Fuse–4 total. Yes this is a lot, and it is done most brilliantly! Pressia, El Capitan, Partridge, Lyda; everyone is back, and it was good to be back. It’s on rare occasion that I can come to like and connect with every single POV in a book that has so many. Every one of them instantly pulled me in. I would follow their story as if I was there, flitting from one shadow to another, following their every move. I love being everywhere at once, getting everyone’s perspectives, motives, and intentions. The POV changes are done smoothly, cut in ways that multiply the book’s stimulating factor. This is true for both Pure and Fuse, the latter combined with even more character development. As for which character is my favorite, I have to admit I have a soft spot for El Capitan and his brother. Their connection is unlike any other–in the most literal of senses–creating a bond that is quite interesting; sometimes tender, other-times bringing up strong waves of sympathy for their awful situation. Helmud is hard to decipher in this pair. His mental disability makes for a surprisingly engaging character. I’m fairly certain he’s much smarter than El Capitan gives him credit for. He is going to surprise us all, is what I think!

Did you know this series is listed as an adult novel? The characters are teenagers, but the nightmarish situations they have to endure, the horror and gore, as well as the length of the book are most definitely pointing to an adult read. Plus I would never recommend this to younger readers. These “teenagers” have to grow up fast in this dreadful world, they are all way beyond their years. While I am an absolute big fan of this series, it does require a certain audience, though if you were not scared off by this review, I think you and I both know that you will be coming to the dark side! If there is one thing to say, it’s that it is beyond inventive!

Find my review of Pure, here!