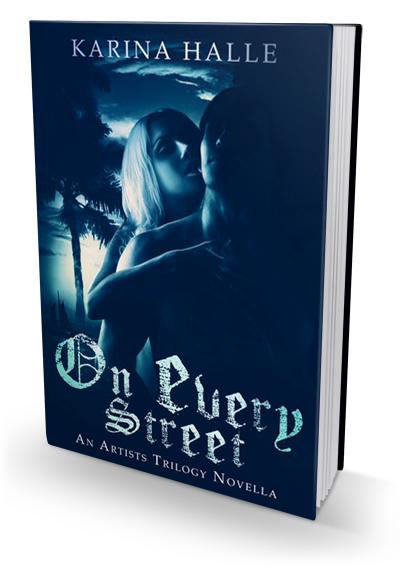 When young con artist Ellie Watt decides to call herself Eden White and go after the drug lord who ruined her as a child, she never expects to fall for one of his henchmen. But Javier Bernal is no ordinary man. Subtly dangerous and overwhelmingly seductive, Eden finds herself passionately in love with Javier, the very person she's set-up to betray. With her body and heart in a heated battle against her deep need for revenge, no one will walk away from this con a winner.

This 50K word (100+ pages) novella takes place six years before Sins & Needles. It can be read before or after Sins & Needles and may also be read as a standalone.

-A copy was provided by Karina Halle for review-

Having already met Ellie in Sins & Needles, I was excited to get the before: What happened to make her run away, and how she fell in love with Javier to begin with. I must say, I feel very torn after this. In Sins & Needles, Ellie meets Camden with whom she develops a very chemistry filled, eccentric relationship that takes the reader by storm. Then she makes Javier out to be someone she fears, someone she must stay away from at all costs. He’s the villain no one wants to see swoop in. In On Every Street, however, we see what made her fall in love with Javier. Knowing their unfortunate downfall doesn’t make their romance, nor Javier himself, any less enticing, either. I didn’t think I would like him at all no matter what I read in this book, but Karina worked her magic and proved me oh so very wrong! He’s a very… fascinating character. He’s got infinite charm that would sweep anyone off their feet, and even after all is set and done, Javier is a really sweet guy–which makes the ending all the worst. I don’t blame Ellie one minute for the choices she made in this book, even when they weren’t always the smartest ones.

Although it’s essentially a novella, it’s on the long side with just as much character and story development as any full-sized prequel. We get to know Ellie before she becomes the Ellie we know; when she was young and gullible, when her only goal was to get revenge from the man who ruined her life. As much as her character is one of the best developed I’ve read already, she becomes even more substantial when we get to understand yet another side of her. For those who haven’t read Sins & Needles, this is the Ellie you’ll be introduced to, and then you’ll get to see her in a new light when you do read S&N. It will also make you read S&N with a different angle. Having gone through her relationship with Javier, having felt the amount of love she has for this man prior to reading it will make for a different reading experience that’s for sure. I wonder which one I’d actually prefer!

On Every Street is very romantic, more about the love story than anything else, it’s also quite hot and steamy which I expected from having read Sins & Needles, though it surpasses that one easily. While this novella is not necessary to enjoy the series, I find it to be a considerably valuable installment as we get to know a very real and very important character in Ellie’s life–someone who plays a big part in carving her into the person she becomes. Additionally, having an idea where the sequel is going, this novella opens up many doors in our hearts and minds for us to be able to go into that sequel full of already set emotion towards the events and characters involved. Instead of being one sided, all for Camden, her and Javier’s romance becomes just as inviting. It definitely makes for an extensive and well rounded story.

It makes you fall in love, only to crush you to pieces, (which is all your fault, really, if you read S&N. *hangs head in shame*) On Every Street is for every romantic at heart who doesn’t mind a little dangerous twist to their love stories!

18 Responses to “Review: On Every Street by Karina Halle”