I received this book for free from Coliloquy in exchange for an honest review. This does not affect my opinion of the book or the content of my review. 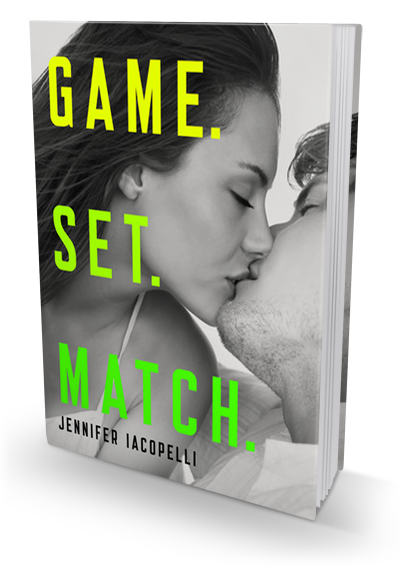 Nestled along the North Carolina coast, the Outer Banks Tennis Academy is the world’s most elite training facility. In this pressure-cooker environment, futures are forged in blood and sweat, and dreams are shattered in an instant.

Penny Harrison, a rising female star, is determined to win the French Open and beat her archrival, Zina Lutrova. But when her coach imports British bad boy Alex Russell as her new training partner, will Penny be able to keep her laser-like focus?

Tennis is all Jasmine Randazzo has ever known. The daughter of two Grand Slam champions, she’s hell-bent on extending her family’s legacy and writing her own happily-ever-after…until her chosen Prince Charming gives her the just-friends speech right before the biggest junior tournament of the year, the Outer Banks Classic.

With a powerful serve and killer forehand, newcomer Indiana Gaffney is turning heads. She’s thrilled by all of the attention, especially from Jack Harrison, Penny’s agent and hot older brother, except he keeps backing off every time things start heating up.

With so much at stake, dreams—and hearts—are bound to break. Welcome to OBX: Where LOVE is a four-letter word, on and off the court.

It’s funny how I can not sit through any sports game and stay awake to save my life, but movies and books on the subject, I love! Game Set Match is the perfect example of why; ultimately about sports,  the story is really about the characters, the dynamics between players, romances that bloom (what’s better than 1 romance? 3 of them! ;), and feeling the excitement of the game by wanting these characters to win so much.

Not into Tennis? Honestly, don’t let that deter you at all for one second. No one can be as clueless as me when it comes to how that game is played, but never did I feel overwhelmed, confused, or bored by it at all. On the contrary, I found myself enjoying the tennis matches the most. Jennifer makes you care about the characters so much that the matches become as intense to you as if you were the one playing. You want these girls to win so badly that I was literally holding my breath during one of the big matches. The only complaint is that I wanted to experience more of these games. Some are faded to black, and once or twice they’re skipped completely and we just get the end result. This is what happens when matches are written to be so exhilarating, it leaves you disappointed when others were skimmed over. Still, I loved all the energy they radiated; even those we didn’t get to see fully were bristling with so much anticipation that in one way it was fun to get treated to the result right away. My blood: it was pumping, dude! *jumps up and down ready to fight a bitch*

The matches wouldn’t have been half as fun if there weren’t such fantastic characters to root for. We’re treated to three amazing point-of-views in this novel; these are 3 determined and confident girls who are attending tennis academy. Each one is dealing with her own difficulties towards the game, some towards other students as well–we get a hint of mean girl-ness caused by jealousy– we also get romance entanglements, and most importantly, we get great and authentic friendships that bloom between the girls. Penny, Indie, and Jasmine, are all as incredibly likeable as they are genuine. They are the heart of this book. I enjoyed all three perspectives just as much as the other, and even now I have a hard time deciding who I would pick as a favorite–though I’ve been leaning towards Indy a little. Their voices never had me confused as to which POV I was reading, they’re distinct with very different personalities. They’re also at different stages in their lives and tennis careers so that we get to experience different degrees of accomplishments as well as the excitement that comes with them.

New Adult = same old same old? Not in this one. This is a story about 3 girls who are dead set on making it big; they are on the path to a very challenging and rewarding career, they’re building new friendships, they’re experiencing post high-school romance; they are new to adulthood. (Not a one with a dark past! I know, right?) To me this felt like the true meaning of New Adult, sex or no sex. That’s right–no sex. These girls are in college, over 17 and independent, and there is definite talk of sex, as well as other mature content like drinking and swearing, yet it doesn’t actually have any sexual content. We know they have sex, but we aren’t privy of these experiences. From the New Adult I’ve read so far this does make it stand out in its genre, but I was completely fine with this. To be honest, it wasn’t needed. NA is not just “YA with sex” like some think. And while there is romance, it’s made part of the book, it doesn’t overrule it (the cover might be misleading). I found it to be a perfectly balanced feel-good book, a little reminiscent of Miranda Kenneally’s Catching Jordan.

Filled with vivacity, Game Set Match surprised me in the best of ways and turned out to be an absolute favorite. I was filled with pure contentment whenever I sat down to read (which was really only twice since I devoured it in mere hours). It’s exactly what I needed at the time. My initial disappointment at the end feeling abrupt was quickly extinguished when I found out it’s a planned series–previously thinking this was a stand-alone. There is no cliffhanger, but its made obvious there should be more to the story. My only hope is that we don’t have to wait too long!