I received this book for free from Penguin Canada in exchange for an honest review. This does not affect my opinion of the book or the content of my review. 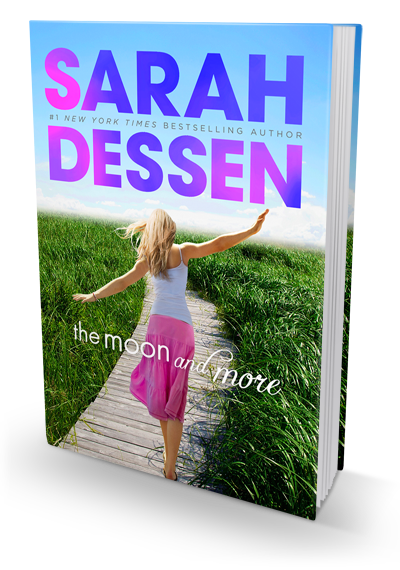 Luke is the perfect boyfriend: handsome, kind, fun. He and Emaline have been together all through high school in Colby, the beach town where they both grew up. But now, in the summer before college, Emaline wonders if perfect is good enough.

Enter Theo, a super-ambitious outsider, a New Yorker assisting on a documentary film about a reclusive local artist. Theo's sophisticated, exciting, and, best of all, he thinks Emaline is much too smart for Colby.

Emaline's mostly-absentee father, too, thinks Emaline should have a bigger life, and he's convinced that an Ivy League education is the only route to realizing her potential. Emaline is attracted to the bright future that Theo and her father promise. But she also clings to the deep roots of her loving mother, stepfather, and sisters. Can she ignore the pull of the happily familiar world of Colby?

Emaline wants the moon and more, but how can she balance where she comes from with where she's going?

As my first Sarah Dessen novel I was a little worried as it seems people either love her books or don’t, so it’s a relief that I fall in with her fans. The Moon and More is an especially perfect beach read. It’s lighthearted, it’s fun, with a great summery atmosphere, and it has enough emotion to keep you fully immersed.

This book is not really about anything at all (and I say this in a positive light), or some may say it’s about everything; it’s about growing up. It spans one summer in Emaline’s life; the last summer before she’s off to college which, for a lot of us, is when our life suddenly feels changed. We say goodbye to our high school days, and often to our boyfriend and hometown as well. It’s a situation many can relate to, making this book – a single summer in the life of a small town girl – surprisingly engaging. Emaline’s dealing with insecurities towards her high school long term relationship, as well as anxiety of knowing she’ll be leaving her small niche in a matter of weeks. In addition, she has her biological father to deal with, which lends some emotional family problems into the mix.

Even though the novel is, in a way, romantically inclined, it remains a part that makes up the sum of this story. If I had to pick what was predominant, I would say it’s family. With two sisters, a grandmother, a mother, a father and a dad, in an exceptionally small town, Emaline’s family is a large part of her every day life, especially that she’s working at the family business renting summer houses on the beach (I did envy her job once or twice!). The family dynamics are lively and full of heart. I loved the bond she has with her mother and sisters, and I’m very happy with how the drama with her biological father resolved. It didn’t go the direction I expected–which was the cliché perfect ending. It may not have worked out 100% happily, but I feel it was very realistic. Emaline also learned a lot from it which made her able to understand their relationship, and even embrace her situation.

To touch a bit more on the romance: that, too, was much more realistic than the happily ever afters. I actually found it was quite perfect in its own way. We have her high school boyfriend, and an intensely ambitious NYC fella named Theo, though don’t worry there is no love triangle. Theo is a little… energetic? He definitely doesn’t fit into the small town life Emaline has been so comfortable in, and to be honest he kind of grated on my nerves for most of the book. His power hungry, arrogant attitude makes it kind of hard to like him. His boss, however, which is nothing but a slob and a total bitch surprised me by how much I enjoyed her character. She was just so… loud. Her whole personality was very loud. The same can also be said about Emaline’s fashionista best friend and the lazy “boy next door”. Oh and her brother, he was just adorable! Honestly this whole cast was very dynamic and spirited. They are easily the best part of the book. It also helps when you’re from a small town like them; I could relate to a lot in their lives.

My first Dessen experience was clearly a successful one, and will not my last. Sparkling with warmth and carefree summer days, The Moon and More is the book you bring with you on vacation!

34 Responses to “Review: The Moon and More by Sarah Dessen”