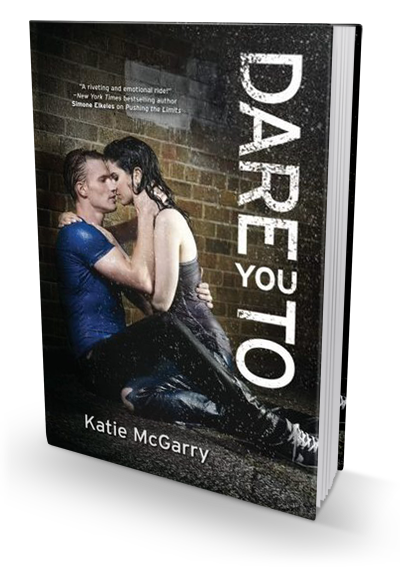 Dare You To by Katie McGarry
Series: Pushing the Limits #2
Published by Harlequin Teen on May 28th 2013
Genres: Contemporary, YA
Source: Harlequin Teen
Buy on Amazon
Goodreads

Ryan lowers his lips to my ear. "Dance with me, Beth."

"No." I whisper the reply. I hate him and I hate myself for wanting him to touch me again....

If anyone knew the truth about Beth Risk's home life, they'd send her mother to jail and seventeen-year-old Beth who knows where. So she protects her mom at all costs. Until the day her uncle swoops in and forces Beth to choose between her mom's freedom and her own happiness. That's how Beth finds herself living with an aunt who doesn't want her and going to a school that doesn't understand her. At all. Except for the one guy who shouldn't get her, but does....

Ryan Stone is the town golden boy, a popular baseball star jock-with secrets he can't tell anyone. Not even the friends he shares everything with, including the constant dares to do crazy things. The craziest? Asking out the Skater girl who couldn't be less interested in him.

But what begins as a dare becomes an intense attraction neither Ryan nor Beth expected. Suddenly, the boy with the flawless image risks his dreams-and his life-for the girl he loves, and the girl who won't let anyone get too close is daring herself to want it all...

After Pushing the Limits became one of my favorite reads of last year, I went into this one with a lot of enthusiasm and high expectations. I’m sad that I didn’t en up loving it as much, but I still quite enjoyed it and am happy that I read it. I also can see why so many are enamored by it, if I had read it at another time I might have enjoyed it much more as well. As it stands I’ve been reading a string of similarly plotted books lately so my patience for certain elements of the book has been worn thin.

Unlike with Pushing the Limits, I had a difficult time with the characters and romance in this sequel. I liked the characters okay, and the chemistry is definitely not missing between them, but the back and forth, hot and cold romance they develop went on a little too long for me until I became utterly exhausted with it. Beth is dealing with a drunk mother who has an abusive boyfriend, making her somewhat of a bitter person who blocks everyone out. She has a hard time opening up to anybody, let alone letting anyone get close enough for her to fall in love. Consequently, she’s not an easy character to like, but she’s meant to be that way. We’re meant to sympathize with her situation, which I did, and like how she grows out of it through the story (like expected), but this did not happen until after she had me wanting to rip my hair out. The problem was more with how she dealt with Ryan than anything else. Athletic superstar, popular, rich, and with a bright future ahead of him, Ryan is Beth’s polar opposite. It’s, at the same time, the allure and the downfall of the romance. Beth being so cautious makes it extremely difficult for Ryan to get her to let him in. At first this was a great kind of frustration. The kind where you yearn for them to finally open up to each other and become rocks to lean on, however this fails to happen for what felt like an extremely long time, I began to lose my eagerness and gain some irritation. My patience for Beth to finally get a clue that the whole world wasn’t out to get her ran out and I simply wanted to slap her silly for trying to ruin every good thing she had. I get that she’s had a very very hard life, her crappy attitude was just making it worse for herself which made it hard for me to connect with her more than on the surface. Perhaps her keeping everyone at arm’s length worked TOO well 🙂 I also can’t fail to mention the constant referral to Ryan’s looks. She must have described his gorgeous godliness over a dozen times in the book. We get it, he’s sculpted perfection, let’s move on, shall we?

No matter my complaints, the characters are still carved into real human beings. The character development doesn’t miss its mark as Katie, again, creates realistic characters with hearts you can feel beating and breaking. Even though I was a little irritated, I still couldn’t help but feel sympathetic towards both of them. Beth for her screwed up upbringing, and Ryan for the pressure he was brought up under. Another part of these books that I enjoy is how it’s not JUST about the romance. Beth has to acclimate to a whole new life where she feels anything but welcome, while Ryan is looking at his family crumbling after his brother announced he was gay to a father who thinks the most important thing is perfect outward appearance.

As with any companion novel it’s always fun to see old characters again. While I loved hearing from Echo and Noah in their brief cameos in this book, Isaiah stole my heart away. I love his character and my heart broke for him in more ways than one. His character has just as much soul and presence, getting his story line ready for the next book. The 3rd installment of this series will be his story, and I absolutely cannot wait for it as I have a very big feeling it will be my absolute favorite. I just hope he gets his happy ending or I may be found in a puddle of my own tears.

Dare You To may not have been as good to me as I had hoped, but I still found myself flipping the pages eagerly, waiting and hoping these two will finally give in to each other completely. The love and chemistry they share make all the hurt and frustration worth it.

20 Responses to “Review: Dare You To by Katie McGarry”