I received this book for free from Sourcebooks Fire in exchange for an honest review. This does not affect my opinion of the book or the content of my review. 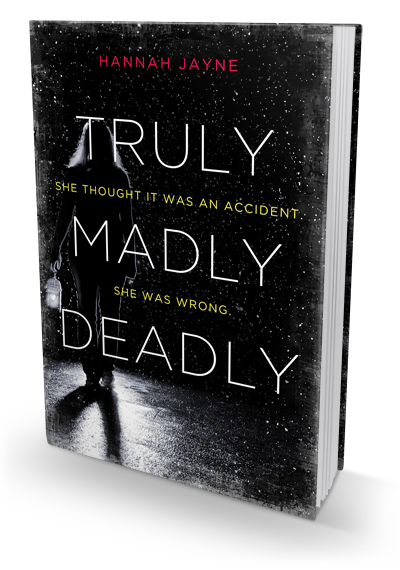 Sawyer Dodd has it all. She’s a star track athlete, choir soloist, and A-student. And her boyfriend is the handsome all-star Kevin Anderson. But behind the medals, prom pictures, and perfect smiles, Sawyer finds herself trapped in a controlling, abusive relationship with Kevin. When he dies in a drunk-driving accident, Sawyer is secretly relieved. She’s free. Until she opens her locker and finds a mysterious letter signed by “an admirer” and printed with two simple words: “You’re welcome.”

A fun and creepy thriller, Truly, Madly, Deadly is a perfectly entertaining read. It does take some suspension of disbelief in certain aspects of the story, but I can see it being a hit by fans of the genre nonetheless.

Sawyer’s boyfriend’s death was only the beginning, it seems. Since the accident, Sawyer seems to have taken on a stalker who’s set on framing her for all the accidents-ruled-murders that have been happening in her town. Aside from the aforementioned, we also have the topics of bullying and abusive relationship that Sawyer has to learn to fight through. What I liked the most about Sawyer’s character was her voice; how she dealt with what was happening felt very real and emotionally gripping. The flashbacks to her past had my heart breaking for her. However, I do prefer my characters strong and feisty, and Sawyer vomited and passed out a little too much for my taste. It’s understandable in her situation, but still. The side characters were just average, and I did feel like some were included to serve the lone purpose of having extra suspects to try to derail us. It did work to a certain extent as I suspected most of them at least once, but it becomes apparent who the true culprit is if you put your mind to it. The author uses a familiar (to me) angle that makes it easy to pinpoint when you’ve read as many murder mysteries as I have.

As I mentioned, the plot is very entertaining with a lot of creepy instances that you can expect from your run-of-the-mill stalker mystery. It’s also a quick read with a steady pacing that makes it easy to fly through. There were a few things from the plot that stood out as a bit unrealistic to me, though. For instance, Sawyer wants to know more about a few of the crimes so, at the police station after falsely claiming an interview (homework) was left for her, she is given the OK by an office to rummage freely through another cop’s work desk, after which she finds and takes confidential case files and other personal police papers that were laid-out on it. No way would an officer allow a teenage girl to “look for her homework” on a detective’s desk by herself like that. Yes I know this is very specific but I watch a lot of cop shows and it annoyed me. Another thing I have difficulty believing is how the killer could have achieved one of the killings. It would take some serious ability to put a dead body in such a position by oneself. I’m not saying it’s impossible with adrenaline and careful planning, but it’s still a stretch – in this case especially but I can’t argue this further without spoilers.

Truly Madly Deadly did have its problems for me, but in the end I can honestly say that I had fun reading it. It’s definitely a decent thriller that amounted to a few chills and thrills along the way.