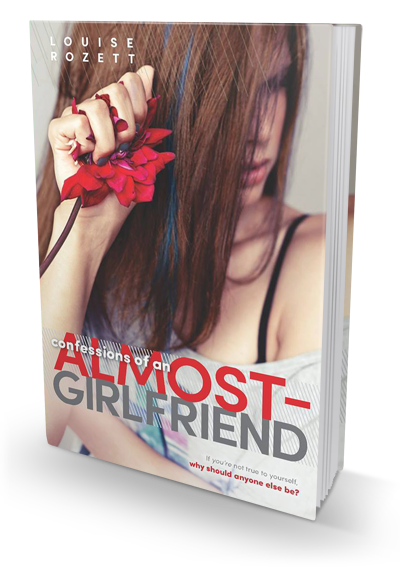 Rose Zarelli has big plans for sophomore year—everything is going to be different. This year, she’s going to be the talented singer with the killer voice, the fabulous girl with the fashionista best friend, the brainiac who refuses to let Jamie Forta jerk her around...

...but if she’s not careful, she’s also going to be the sister who misses the signals, the daughter who can only think about her own pain, the “good girl” who finds herself in mid-scandal again (because no good deed goes unpunished) and possibly worst of all...the almost-girlfriend.

When all else fails, stop looking for love and go find yourself

*Spoiler free for the series*

After enjoying Confessions of an Angry Girl more than I expected to, I’m happy to report that this is a strong sequel with impressive character growth. I may even have enjoyed it more than the first.

What surprised me in the first book was the amount of depth there was to the story. You think it will be this whiny drama-filled book, but while there is definite drama, everything feels so realistic and raw. The protagonist, Rose, does come off as someone very confused at first, especially in the first book. She’s mean to herself and lacks self confidence, in this sequel, however, her character comes out of her shell and she finds where she truly belongs; where she wants to belong. I loved this dramatic change in her. She’s realizing that being like everyone else is not what will make her happy. She figures out who she’s really meant to be and takes the leap, transforming into a confident, passionate girl who had me cheering her on. Her supporting characters don’t let down either. We have the same old charismatic friends who bring it up a notch. With everyone a year older, we have louder, more distinguished personalities of people who are… can I be cheesy and say “spreading their wings”? >.< My favorite side character is Angelo; he just amuses me. Though Tracy is pretty fabulous, too!

As for the romance… GAH! It’s just as frustrating as the first if not moreso. It’s realistic in its high school-ish mess, I’ll give you that, but it has me wishing Rose would let Jamie go. He has obvious issues and plenty of secrets, I don’t trust him nor his intentions. It feels like he’s stringing Rose along just because he can – exactly as Conrad told her. They do have swoony chemistry, but he either has to give in or leave her alone. I think Rose is finally thinking the same way by the end, at least, so hopefully in the next book she’ll kick him to the curb if he doesn’t figure himself out stat! I’m actually hoping she ends up with Angelo to be honest. That guy is just so caring and… uncomplicated. I think that’s exactly what she needs.

The first book touched a lot on Rose’s grief from the death of her father, this sequel follows this largely through emotionally charged therapy sessions with Rose and her mother who are both struggling with anger and heartache. Her brother is more present as well; we learn what changed him so much since starting college while he reconnects with his family. Family oriented books always touch my heart. I found the complicated relationships to be full of realistic conflict and heartfelt emotions. Furthermore, we also explore some serious topics in this book: anti-gay bullying, drugs, physical abuse. Each one is handled skillfully without being cheesy after school special-ish or stereotypical. It’s honest, even a little gritty. It all adds up to being a surprisingly profound novel.

Confessions is a perfectly balanced series with just enough drama, just enough humor, and just enough emotion to get us invested without being overwhelmed. I’d recommend it for when you’re looking for a quick, vibrant read speckled with life’s turmoils.

Find my review of Confessions of an Angry Girl 14, here!

Open to US addresses only
Giveaway ends July 4th, 2013
Use the Rafflecopter below to enter

13 Responses to “Review + Giveaway: Confessions of an Almost-Girlfriend by Louise Rozett”