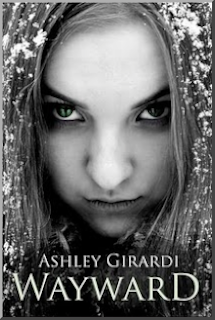 When the dark magic inside of her — magic that she never dreamt even existed — erupts in a violent display, it kills a member of a rival family. Now, Hex’s family hopes to use her magic for their own sinister purposes and their enemies just want her dead. Abandoning her magic will leave Hex defenseless but she’s seen how quickly power corrupts even the best intentions.

She has to make a choice:

Save her life or save her soul.

Ah man, up until at least three quarters through I was really enjoying this. But there are too many flaws in this book for me to justify giving more than 2 stars. I say three quarters through because I thought maybe those flaws would be explained or fixed during the story, but they weren’t. It just wasn’t all that exciting.

In of itself, the story is interesting. It’s about witches, the most powerful witch – Wayward – to be exact, who doesn’t agree to use her powers at all, never mind for evil. However, she’s being forced into it by a deal she can’t refuse. I love witches, them and necromancers are probably my favourite supernatural beings, but I found this one fell a bit flat and had a lot of inconsistencies.

For starters, I didn’t understand why Wayward refused to use her powers, especially when it came to defending herself in a fight. Would someone know if she used them? Then why would she use magic to make a girl choke just cause she didn’t like her? I didn’t understand. Then there was her family – her siblings. Why was she so afraid of them? What was Marco planning to do to Sam? She was saying “eat her”… was that literal? Is he a witch or a vampire? Huh!!? o_O

The most prominent factor that I’ll call a flaw, is that the villain wasn’t very villainy. I wasn’t afraid of him – or understood why Wayward was either. We’re told he runs the Blooded – powerful beings that kill witches who tell humans about the magic – but we’re never really made to be afraid of the Blooded, so why am I supposed to be afraid of Valentine again? I thought he was fairly sweet at the beginning. It also wasn’t made clear if she hated him or secretly loved him.

Those were the biggest issues I had with the book. I did like the protagonist, Wayward, and the romance in the story. Wayward is a really likeable character. She wasn’t full of herself or dumb. She knew what was going on and she didn’t let anyone walk all over her. For the romance, I liked how it was realistic. It wasn’t love at first sight or perfect from the get-go. It was normal, awkward high school romance; cute and sweet.

It wasn’t horrible, it just never really captivated me. I was also let down by the ending and lack of deep plot development. If you really enjoy witches, you may still want to give it a try. You never know.

“In My Mailbox” is a meme, created by Kristi at The Story Siren, that features books I’ve received/purchased/borrowed during the current week.  Let’s see what I got this week. (click on images for Goodreads synopsis)

I have received for review:  I have gotten from giveaways:       Freebie on Smashword: I am actually off to go shopping for books bright and early tomorrow morning: My favorite thing to do when I’m not reading! I will feature those next week.  What did you get this week?

END_OF_DOCUMENT_TOKEN_TO_BE_REPLACED

Traveling through a dark and twisted Northern California, they have only each other to rely on for survival. Together, they journey toward the angels’ stronghold…

END_OF_DOCUMENT_TOKEN_TO_BE_REPLACED

Budding designer Lola Nolan doesn’t believe in fashion . . . she believes in costume. The more expressive the outfit — more sparkly, more fun, more wild — the better. But even though Lola’s style is outrageous, she’s a devoted daughter and friend with some big plans for the future. And everything is pretty perfect (right down to her hot rocker boyfriend) until the dreaded Bell twins, Calliope and Cricket, return to the neighborhood.When Cricket — a gifted…

END_OF_DOCUMENT_TOKEN_TO_BE_REPLACED

Just as Ashton comes to accept her newfound heritage, she’s summoned to fulfill a treaty laid down centuries before — a treaty that will divide her love and test her loyalty. In the end, her future isn’t her biggest concern, her humanity is….

END_OF_DOCUMENT_TOKEN_TO_BE_REPLACED

Together they plunge into the world of dark magic, but when a hundred-year-old blood witch comes hunting for the bones of Silla’s…

END_OF_DOCUMENT_TOKEN_TO_BE_REPLACED

Giveaway is now CLOSED. Winner is Ashley of Book Labyrinth.

Very happy to have reached 100 followers already. I love my fellow bloggers, and since you’re all so awesome, I’m giving away an ARC of Legend to celebrate. It’s a great dystopian novel by author Marie Lu. Check out my review here.

Make sure to check out my other giveaways. Thanks so much for following my blog! Giselle